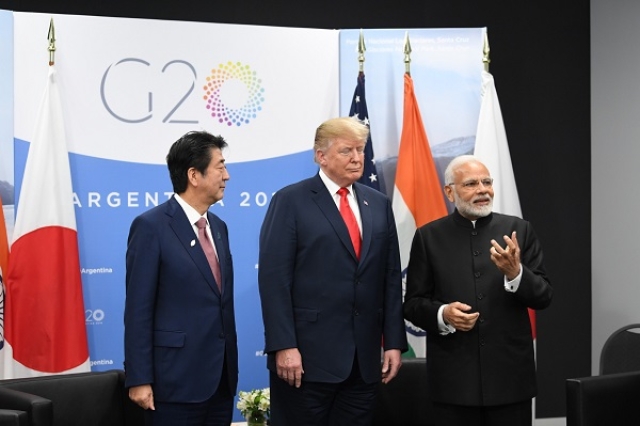 Prime Minister (PM) Narendra Modi will be holding about 10 bilateral meetings, including with President of the United States Donald Trump and French President Emmanuel Macron among others, on the sidelines of the G-20 summit in Japan this week, reports LiveMint.

While attending the fourteenth G-20 summit in Osaka from 28-29 June, PM Modi will also participate in the Russia-India-China (RIC) and the Japan-America-India (JAI) trilaterals, as well as meeting of the leaders of the BRICS nations.

PM Modi is also expected to hold bilateral meetings with Turkish President Recep Tayyip Erdogan and Japanese PM Shinzo Abe. He will be assisted at the G-20 meetings by former Union Minister Suresh Prabhu who would be India's Sherpa in the meeting of the world's top economies. A sherpa is a personal representative of a head of state who prepares ground for him or her at international summits.

The G-20 summit will be witnessing sessions on global economy, trade and investment, innovation in the digital economy, artificial intelligence, addressing inequalities and realising inclusive and sustainable world, and climate change, energy and environment.