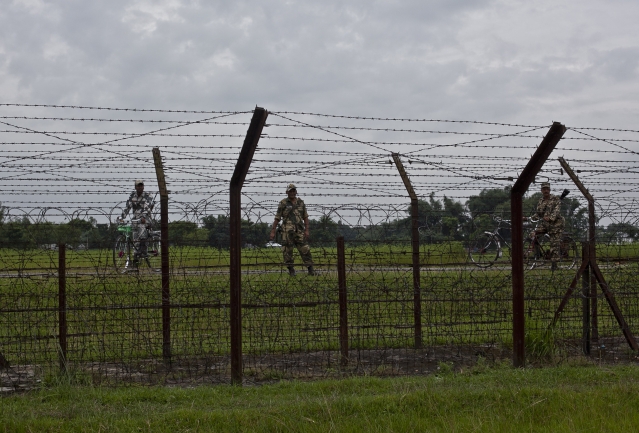 A border fence between India and Bangladesh. (Shazia Rahman via Getty Images)

Bangladesh border is fast becoming a entry point for Nigerian citizens to enter India illegally. In the last couple of months twenty three Nigerian citizens have been apprehended in India’s frontier region of the Northeast, reports The Diplomat.

The police apprehended these foreign nationals from Meghalaya and Assam after they entered India through a porous stretch in Tripura in the Northeast, which borders Bangladesh.

Meghalaya police chief R Chandranathan said, “We are taking this case very seriously. All ramifications and possibilities are being probed”.

The probe has unraveled vital leads, like all the Nigerian citizens who were travelling in groups belong from the southern zone of the country, which is Christian dominated. Bangladeshi agents in Nigeria are responsible for their travel and itinerary who also might have helped facilitate their cross into India.

Their aim was to reach New Delhi where a large diaspora of Nigerians lives in the southern districts. Many Nigerians have also been convicted for drug peddling in India, but the police believe that these arrested men were motivated by the prospect of earning money through cyber crime.

The latest report of Narcotics Control Bureau (NCB) revealed that Nigerians constituted about 40 percent of foreigners arrested for drug crimes in India during 2017.

“If they are able to earn money through fraud, they might return through the same route to Bangladesh after making provisions for the transfer of the amount. And if they are convicted for crimes, then they would serve the jail sentence and then get deported. It’s a risk worth taking for them,” claimed a middle-rung official of Directorate of Revenue Intelligence (DRI).

However, what concerns Indian security agencies is that the Nigerian nationals went unnoticed and were apprehended 200 kilometres into Assam and Meghalaya.

The development also establishes the existence of safe routes that facilitate the movement of people and commodities across the border and raises serious national security implications.