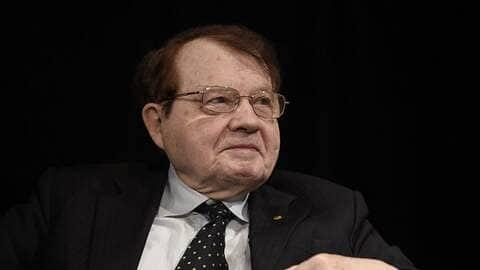 Nobel prize winning scientist and French virologist Luc Montagnier has stirred a fresh controversy by suggesting that the SARS-CoV-2 virus came from a lab, and is the result of an attempt to manufacture a vaccine against the AIDS virus, AFP reported.

Montagnier won the 2008 Nobel Prize for Medicine along with Françoise Barré-Sinoussi and Harald zur Hausen for the discovery of the human immunodeficiency virus (HIV).

In an interview given to French CNews channel and during a podcast by Pourquoi Docteur, Montagnier claimed that the virus, which causes the COVID-19 infection was a result of an attempt to manufacture a vaccine against HIV in a Chinese lab.

Montagnier pointed out to the presence of elements of HIV in the genome of the coronavirus and even elements of the "germ of malaria". He said the characteristics of the new coronavirus could not have arisen naturally.

"The Wuhan city laboratory has specialized in these coronaviruses since the early 2000s. They have expertise in this area," he was quoted as saying. He suggested that an “industrial” accident would have taken place in the Wuhan National Biosafety Laboratory, he added.

Reports have emerged that the novel coronavirus may have been accidentally leaked by an intern working at the Wuhan Institute of Virology in China.

Montagnier’s claims however was dismissed by another.French virologist Étienne SimonLorièr. AFP quoted Montagnier as sating that “these are very small elements that are found in other viruses of the same family”.