Protesters Speak Through Pockets: Sabarimala Row May Impact State Earnings From Over A 1,000 Temples 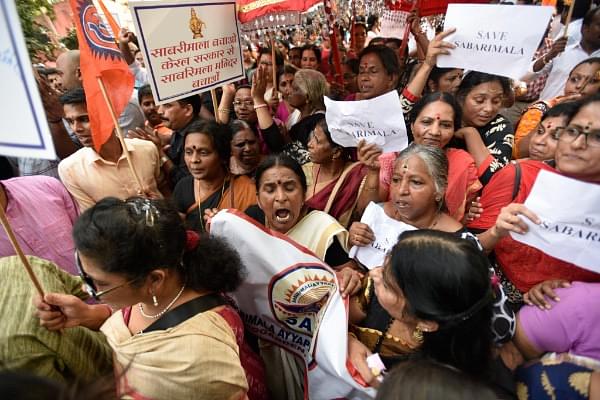 The ongoing Sabarimala impasse in Kerala might cause a drop in temple revenues and affect the functioning of 1,188 temples, The Hindu has reported.

The anticipated dip in the revenues from the Sabarimala Temple is the key reason behind the concern. The temple has been a sight of protests by devotees and police action since the controversial Supreme Court judgement.

Travancore Dewaswom Board (TDB) commissioner N. Vasu told The Hindu that only about 61 temples, including Sabarimala are self-sufficient. Rest rely on the income earned from other temples for their sustenance.

The monthly salary and pension bills of the Travancore Dewaswom Board have been estimated at Rs. 500 crores. The Board has about 5,000 employees and 4,000 pensioners. The Board has also recently increased the salary and other benefits of employees. Dip in existing revenues will further add to the burden on the board.

Any drop in revenues will also impact the rituals conducted regularly in Kerala’s temples. Maintenance, construction and other civil works will also be affected. Ongoing works may have to be stalled and those planned may have to be deferred.

The situation is worsened by the fact that the State needs funds to repair damaged temples in the aftermath of recent floods.