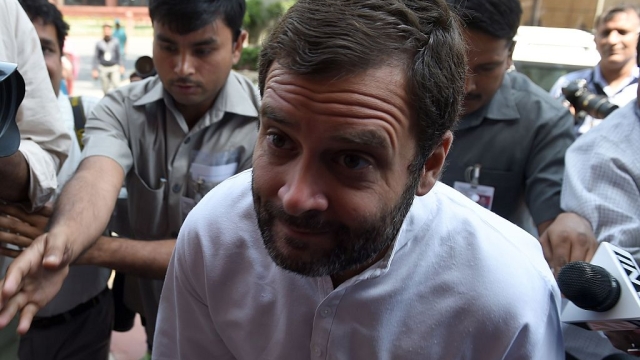 If one has noticed, Rahul Gandhi is putting his foot in the mouth a lot less than he used to. His jibes on the Bharatiya Janata Party (BJP) have become sharper than before. His one liners are also much better and even delivery of speech is becoming polished by the day. Certainly, something has changed. Quite likely, the real Rahul Gandhi is being censured and his handlers of social media, speechwriters et al are trying their best to present a different person, who is smart, funny and one who doesn’t take himself seriously. Certainly, these characteristics are not what people are used to seeing in Sonia Gandhi’s heir apparent.

It is no surprise then that people are doubtful if he is handling his social media all by himself or by some well-paid public relations agency with a bunch of fine minds contributing to the end output, i.e. tweets. To be honest to Gandhi, he is not on Twitter in his personal capacity. It’s his office. Just to make sure that there is some fall guy, a nephew if you will, in case some link to Gandhi watching POGO channel is posted or some other such scandalous event of sorts.

But today, he took to Twitter, and in a self-effacing way which is not typical of Gandhi, commented about who the real ‘person’ behind his office Twitter handle is: his dog.

To give credit to whoever is handling the account, it’s very well done. It’s funny and shows cooler side of Rahul Gandhi. As far as political messaging goes, this hit the nail on the head, so to speak.

But as with most things in Indian politics, things are not as simple as they appear in tweets. There is always a backstory.

And in Rahul Gandhi’s case, this dog tweet was a perfect invitation for former Congress leader from Assam Himanta Biswa Sarma to jump in and spoil Gandhi’s party. Incidentally, Rahul Gandhi’s dog had a role to play in Sarma deciding to quit the grand old party for good.

Infighting had broken out in Assam Congress and Sarma had gone to meet Vice-President of the party Rahul Gandhi. He narrates the story thus:

He was not conducting the meeting. He was busy with the dog, a small dog. When you have a discussion with a Chief Minister (Tarun Gogoi), you can have a lot of affection for your dog, but you don’t bring your dog to such a meeting. Suddenly the dog started eating biscuits from our table. And he was encouraging the dog. So coming out I told Tarun Gogoi - ‘sir it is goodbye for me’. You can have affection for the dog, but this is a serious discussion, you need to participate in it. You need to show that you are giving attention to people you have called to your home. Then you cannot show a king’s style. That is not the way you conduct yourself.

Sarma reminded Rahul Gandhi of that meeting today, and his tweet went viral spoiling Rahul’s chance of coming out as a cool guy.

Sir @OfficeOfRG,who knows him better than me.Still remember you busy feeding biscuits 2 him while We wanted to discuss urgent Assam's issues https://t.co/Eiu7VsuvL1