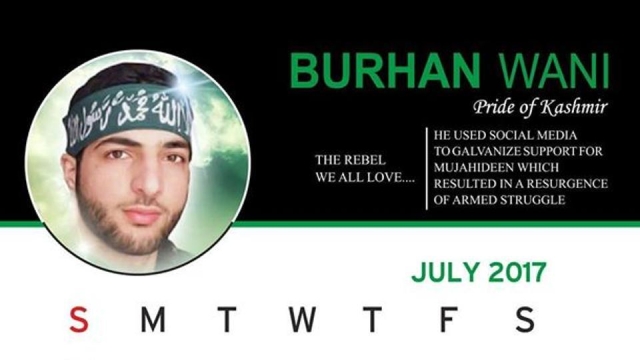 A 2017 calendar in Kashmir, allegedly issued by the Hurriyat Conference backed Aalaw group, has honoured Hizbul Mujahideen terrorist Burhan Wani, calling him the “pride of Kashmir” and the “rebel we all love”. The calendar, designed similar to the Jammu and Kashmir Bank one, carries pictures of 12 “achievers” from the state in different fields, Hindustan Times reported on Tuesday.

According to a local newspaper, the police on Sunday arrested six people for printing the calendar, but Kashmir Inspector General S J M Gillani refuted the reports. “Our cyber cell is carrying out an investigation to find out what is the source. It is a routine process that goes on. No arrest has been made in this case,” he said.

Describing the terrorist’s activities, the calendar says Wani “used social media to galvanise support for Mujahideen which resulted in the reassurance of armed struggle” in the state. Apart from making speeches romanticising militants and the armed struggle sponsored by Pakistan, the Syed Ali Shah Geelani-led Hurriyat is known for distributing printed material in international conferences and schools that present the Indian state in bad light.

In September 2016, the Hurriyat Conference distributed books titled Justice Delayed, carrying a map of Jammu and Kashmir on the cover, that showed only Jammu, Ladakh and the Kashmir Valley as Jammu and Kashmir.

Areas such as Pakistan-occupied Kashmir, Gilgit-Baltistan and Aski-Chin, controlled by Islamabad and Beijing respectively, were removed from the map, indicating that the Hurriyat sees these as parts of China and Pakistan and considers them legally settled.