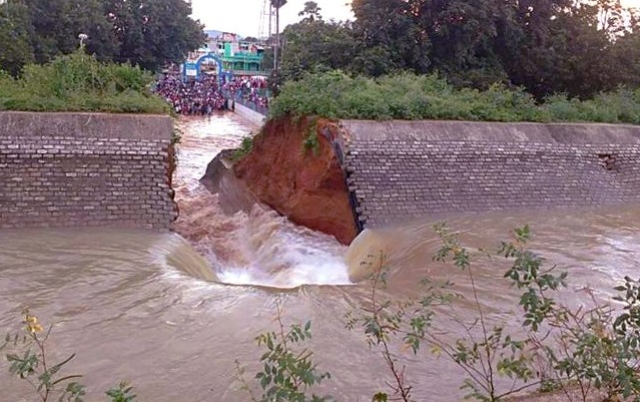 The breached section of the Bhagalpur Canal

The Bihar government today (20 September) ordered a probe into the breach of a canal in Bhagalpur, which led to the cancellation of its inauguration today by Chief Minister, and a barrage of criticism from the opposition including Janata Dal (United) rebel Sharad Yadav.

Bihar: Ahead of inauguration tmrw portion of dam in Bhagalpur's Kahalgaon broke down;dam made at cost of Rs.389 crores. Nearby areas flooded pic.twitter.com/EIdBfonnd7

The wall broke up after being hit by current of the Ganga when the pump was switched on for a trial run. Gushing waters entered Kahalgaon, about 3 km from the project site, and inundated areas in an NTPC township.

"A probe by Principal Secretary, Water Resources Department, has been ordered into the matter," State Water Resources Minister Rajiv Ranjan Singh Lallan today told PTI. He was also quick to say that the NTPC had built an underpass under the canal which could have ‘weakened the canal’.

On his part, Principal Secretary Arun Kumar Singh admitted the "department's fault" in not checking the canal before its inauguration. "I personally express regret on behalf of the department," he told reporters in Bhagalpur.

He said stringent action would be taken against officials found guilty and the project would be inaugurated "after two months" during which the deficiencies would be addressed.

The Principal Secretary said the department is yet to check the papers to ascertain if a no objection certificate was taken before constructing the underpass.

NTPC Kahalgaon Executive Director Rakesh Samuel, who met the Principal Secretary, said the underpass was constructed long ago and he was yet to check old records.

He, however, added, "The NTPC does not do any work without obtaining NoC."

The minister said the canal was built during 1985-88 and the government just did the mechanical part of the project by constructing the pump station in the past one year to lift Ganga waters for irrigation purposes.

"But officials should have checked the canal, too, before its scheduled inauguration," he said.

The collapse invited harsh comments by opposition Rashtriya Janata Dal which said it was constructed with "poor quality" materials. "It is a glaring example of corruption under the Nitish Kumar government," RJD President Lalu Prasad alleged in Patna.

"Earlier rodents caused breach in embankments to trigger flood in Bihar. Did crocodiles break the canal wall with the help of their mouth this time in Bhagalpur?" he said taking potshots at the state government.

Lallan brushed it aside saying Prasad had no moral right to issue such "sermons".

Rebel JD(U) leader Sharad Yadav also attacked the government over the incident. "Did any such tragedy happen when a project worth about Rs 400-cr could not be inaugurated due to breach in the canal a day before?" he asked.

The Rs 389.31-crore project has a total irrigation capacity of 27,603 hectares of which 22,816 is in Bihar and 4,887 hectares in neighbouring Jharkhand, a government brochure about the project said.

The erstwhile Planning Commission had originally approved the project in 1977 at an estimated cost of Rs 13.88 crore. The first administrative approval was provided in 2008 involving a cost of Rs 389.31 crore, the brochure said.