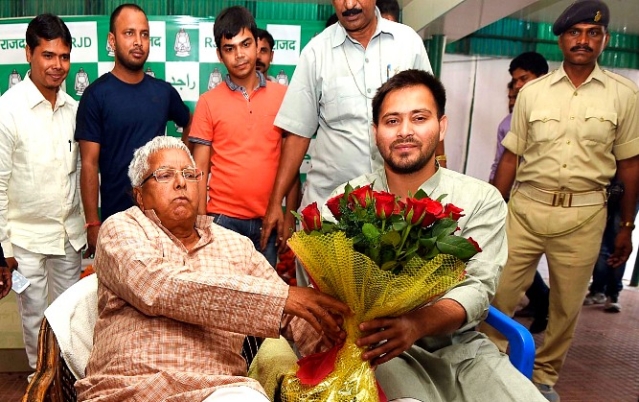 In a major setback to Tejashwi Yadav, the leader of opposition in Bihar and son of RJD founder Lalu Prasad Yadav, the Supreme Court on Friday (8 February) dismissed his petition challenging the Patna High Court order asking him to vacate the government bungalow.

He was allotted the bungalow while being the deputy chief minister of the state.

The court also ordered him to immediately shift to an accommodation reserved for the leader of the opposition.

A Supreme court bench comprising of Chief Justice Ranjan Gogoi and Justices Deepak Gupta and Sanjiv Khanna also imposed a fine of Rs 50,000 on the Rashtriya Janata Dal (RJD) leader for for "wasting precious judicial time" by filing a plea to retain his current bungalow.

"What is this luxury of litigation? Precious judicial time is being wasted by you," observed the CJI as soon as senior lawyer and Congress MP Abhishek Manu Singhvi stood up to argue Tejashwi's appeal.

The sprawling bungalow at 5, Deshratan Marg was allotted to Yadav in 2015 when he was appointed as the deputy chief minister of the short-lived ‘Mahagatbandhan’ government headed by alliance partner Nitish Kumar.

Nitish broke the alliance RJD and formed a new coalition government with BJP. Senior BJP leader Sushil Modi was appointed as the deputy Chief Minister. Tejashwi however refused to vacate the bungalow and continued to stay there.

A Single judge and a division bench of Patna High Court had earlier dismissed Yadav's plea against the state government's order through the estate officer to swap his accommodation with his successor Sushil Modi.

The court had also ordered Yadav to vacate the government bungalow for Deputy CM Sushil Kumar Modi and ordered him to move to an accommodation for the leader of the opposition.