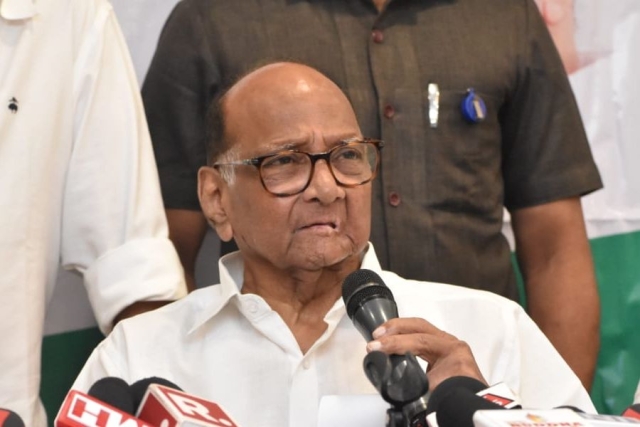 The deliberation on Maharashtra government formation is on last leg as NCP chief Sharad Pawar has arrived in Delhi to meet Congress president Sonia Gandhi 4 pm on Monday (18 November) to take a final call on joining hands with the Shiv Sena, reports Indian Express.

As per reports, the three leaders - Ahmed Patel, Mallikarjun Kharge and K C Venugopal will sit with Pawar to fine tune the power sharing agreement and the CMP between the three parties before the final deal is put to Sonia Gandhi.

The state is currently under President’s rule since the falling out of a pre-poll alliance between Sena and the Bhartiya Janata Party (BJP).

The Nationalist Congress Party (NCP) has said that a final decision on the formation of the next government in Maharashtra by the proposed Congress-NCP-Shiv Sena ally will be taken in the next couple of days.

In a related development, Bharatiya Janata Party's Union Minister of State for Consumer Affairs, Raosaheb Danve-Patil, said that there is a possibility of the BJP-Sena returning to power again soon with a BJP Chief Minister.

"Such a situation would not have arisen had Balasaheb Thackeray been alive today. We shall work according to the formula agreed upon by him and the late Pramod Mahajan," Danve-Patil said.

Simultaneously, Ramdas Athawale, President of the Republican Party of India and Union Minister of State for Social Justice, declared that it would not be possible for the Sena to form a government in alliance with Congress-NCP.

"They cannot form a government with Congress-NCP... It is better if the Sena returns to the BJP fold and forms the government as soon as possible for the progress of the state," Athawale said.

Athawale added that after he requested BJP President and Union Home Minister Amit Shah to mediate in the matter, Shah had told him not to worry as everything will be sorted out soon and a BJP-Sena government will come to power.

Meanwhile, authoritative sources in the Sena indicated that most aspects pertaining to government formation among the three prospective partners -- Sena-NCP-Congress -- have been already finalised and Sena President Uddhav Thackeray is likely to become the next Chief Minister of Maharashtra.

There are purported grand plans in the offing for a swearing-in ceremony in Mumbai with the probable presence of several non-BJP Chief Ministers from different states, though the full details are still being worked out.

Rejecting the old formula of 1995, sources said it has no meaning now that the BJP has snapped ties with Sena and even ejected it out of the ruling NDA, making its MPs sit with the Opposition in the winter session of Parliament starting Monday.