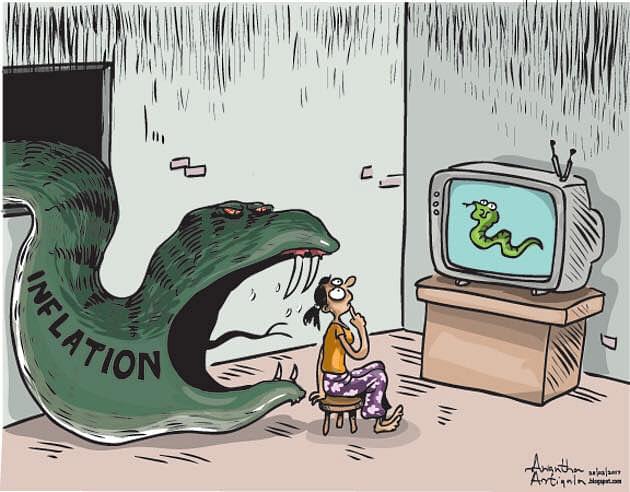 In opposition to the belief that southern states are more prosperous than their northern partners, an investigation has uncovered that all south Indian states, including Karnataka, detailed higher average inflation in contrast to the rest of the nation on a consistent basis from 2013 to 2018. Not just that, the study conducted by the Reserve Bank of India and the Ministry of Statistics, likewise, demonstrated that the southern states have the highest fluctuation in the prices of goods and services, reports Deccan Herald.

The average inflation of southern states was near 7 per cent somewhere between the years 2013 and 2018, showed the study. The southern states have a consolidated weight of about 25 per cent in the all-India inflation index. Since the all-India consumer price index (CPI) is gathered as a weighted normal of the state-level price lists, price movements in these states is expected to affect National level inflation hugely. The RBI tracks consumer price index to formulate monetary policy decisions.

As indicated by the study, the all-India feature inflation or WPI was affected to a great extent by the developments in food inflation. The moderation in inflation amid 2017-18 can be to a great extent ascribed to food inflation, with its contributions to overall inflation falling underneath 30 per cent from an average of 52 per cent for the past five years since the year 2013. Other significant contributors to impact inflation every one of these years were oil-based goods and lodging rentals.

Food inflation additionally showed the most astounding instability or variance, which, thus, was transmitted to the overall inflation, given the expansive weight of food (45.9 per cent) in the all-India consumer price inflation. The information provided in the study demonstrated that the RBI’s focus on inflation helped consumer inflation descend from 11.5 per cent in November 2013 to an average dimension of 3.6 per cent in 2017-18.

It demonstrated that all the southern states had higher average inflation than northern states like Punjab, Haryana, Uttar Pradesh and Uttarakhand and additionally states in different areas like Maharashtra and Madhya Pradesh. In any case, Bihar recorded the most elevated inflation of 16.1 per cent in November 2013, while Chhattisgarh recorded the least of (- ) 2.3% in June 2017.