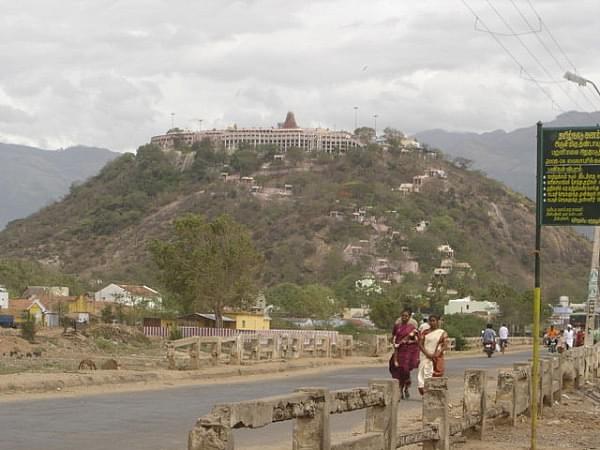 Palani Hill, on top of which lies the Palani Murugan Temple.

P Dhanapal was once the head of the Hindu Religious and Charitable Endowments (HR&CE) department of the Tamil Nadu government. In his position as the head of the department, he would have been the man answerable for the proper upkeep and maintenance of hundreds of temples and related artefacts across the state.

And today, the police is going after him for conspiring to steal gold and other precious metals for making a new idol at the centuries-old Palani Dandayuthapaniswamy Temple.

The case against the former chief of HR&CE is that he was instrumental in the conspiracy to embezzle over Rs 60 lakh in 2003 towards the purchase of gold for making a new idol at the temple.

Apart from temple funds, huge quantities of gold appear to have been collected from the devotees.

Once the idol had been completed, it was found within months to have turned black, and instead of nine rare metals, only four had been used in the making of the idol. Despite suspicions, the officers in charge did not file complaints.

The temple’s then executive officer and Muthiah Sthapati, the idol maker involved with the alleged crime, are among the five arrested so far.

Reports say the prime suspect, Dhanapal, may have attempted to flee the country along with his family, and that such an attempt had been scuttled.