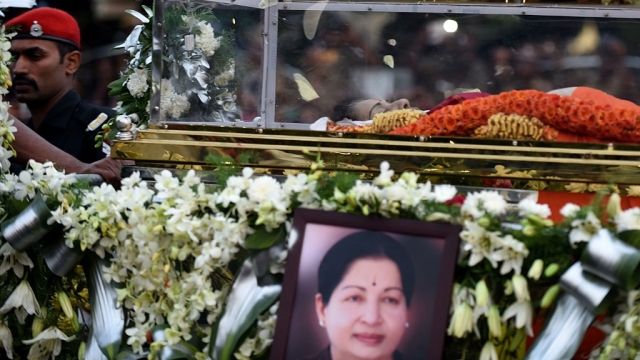 The mortal remains of Jayalalithaa are carried during a procession to her burial place in Chennai. Photo credit: ARUN SANKAR/AFP/GettyImages

A Supreme Court bench led by Chief Justice of India Ranjan Gogoi today issued a stay order on a probe being carried out into the death of former Tamil Nadu chief minister J Jayalalithaa, reports The Indian Express.

She had died in December 2016 while being admitted at Apollo Hospitals in Chennai, where she underwent treatment for a period of 75 days. An inquiry commission headed by Justice A Arumughaswamy was set up afterwards to investigate the treatment she received.

The committee was empowered to look into the efficacy, adequacy, appropriateness and other aspects of treatment provided by the hospital during Jayalalithaa’s hospitalisation.

Apollo Hospitals had first approached the Madras High Court objecting to the proceedings of the inquiry commission. However, the court passed a judgment upholding the probe.

Subsequently, Apollo Hospitals appealed against the order before the apex court, whose bench, which also included Justices Deepak Gupta and Sanjiv Khanna, has now granted it a temporary reprieve.