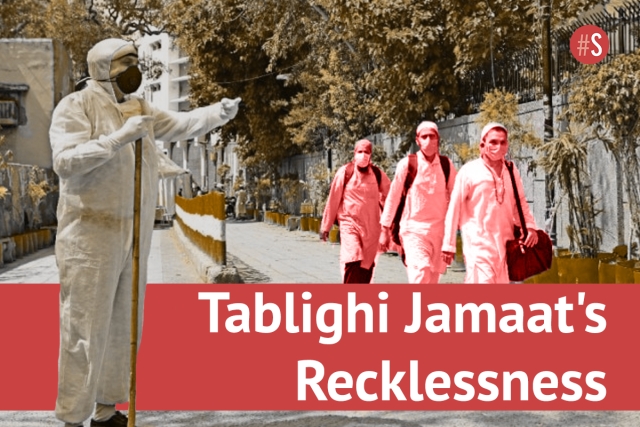 Following complaints of "objectionable behaviour" by many members of Tablighi Jamaat -- in some instances singing obscene songs before the nursing staff -- a joint probe by Ghaziabad police chief and Additional District Magistrate has been ordered.

In a complaint, some Tablighi followers who were rounded up and taken by bus to Ghaziabad on Tuesday-Wednesday for a medical check-up after they had been to the Markaz headquarters -- said to be the new coronavirus epicentre in the national capital -- allegedly spat on police personnel and government officials.

A section of staff in Ghaziabad-based MMG Government Hospital wrote in a complaint on Wednesday to the Chief Medical Superintendent that "many Jamaat members admitted in the isolation ward of the hospital were misbehaving with the employees and the nursing staff".

The CMO also claimed that these patients were asking for cigarettes from the housekeeping staff and making vulgar signs at nurses. "In such circumstances, it is difficult to treat these patients,"

CMO Ghaziabad complains to UP police that Tablighi Jamaat members in quarantine are walking around without trousers on, listening to vulgar songs, asking for bidi cigarette from nurse and staff and making obscene gestures towards nurses. Asks police to restrain them. pic.twitter.com/scBlds9Q2C

The Jamaat members, many of whom are corona suspects, were seen roaming around semi-nude in front of female nursing staff and singing obscene songs, the complaint said.

The staff said in their letter to the Chief Medical Superintendent that many Jamaat members in the hospital have demanded tobacco and cigarettes.

Ghaziabad Senior Superintendent of Police Kalanidhi Naithani told IANS that a complaint has been received. "The allegations are serious. We won''t tolerate any misbehaviour. ADM Shailendra Singh and Superintendent of Police (City) Manish Mishra are jointly investigating the matter. Based the probe report, strict action will be taken against the culprits," said Naithani.