The Art Of Abrahamic Deal: Trump Announces ‘Dawn Of The New Middle East’ After Brokering Peace Accord Between Bahrain, UAE, Israel 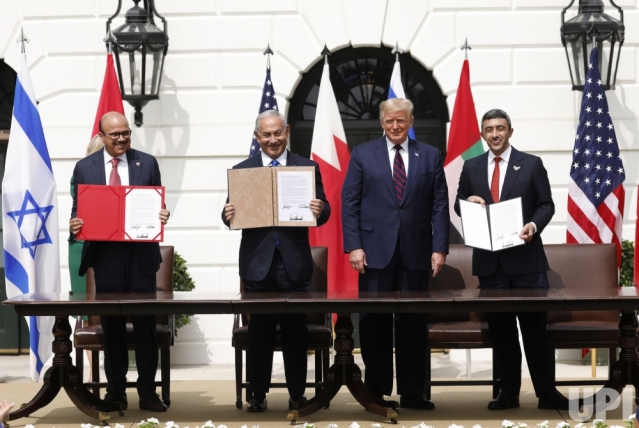 Presiding over the signing of the history Middle East peace agreement between Israel and two Gulf nations on Tuesday (Sep 16), Trump described it as “dawn of the new Middle East”.

“We’re here this afternoon to change the course of history,” Trump told attendees of the ceremony at the White House. “After decades of division and conflict, we mark the dawn of a new Middle East.”

The peace agreements were signed by Israeli Prime Minister Benjamin Netanyahu along with the foreign ministers of Bahrain and the UAE.

“This day is a pivot of history, it heralds a new dawn of peace,” Israel’s prime minister said.

Brokered by the U.S, Abraham Accords ( named after the common prophet of Jews, Christians and Muslims) was signed by Israel, the United Arab Emirates and Bahrain, normalizes relations between the nations and seeks to further isolates Tehran.

Israel and the two Gulf states for the first time consented to a full diplomatic relationship, which could involve posting ambassadors or other high-level officials. Israel does not currently have diplomatic relations with any Arab nations. The countries are likely to strengthen their mutual relationship by signing agreements on areas such as investment, tourism, cultural exchanges and direct flights.

Trump’s son-in-law, Jared Kushner, who also serves as his counsel, is said to have played an instrumental role in brokering the historic peace deal.

In a bid to isolate Iran, U.S. has been aggressively pushing for an accord between Israel and Gulf Arab nations.