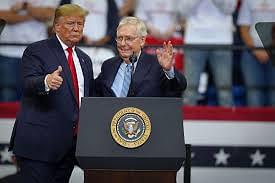 McConnell’s sharp criticism of President Trump and his supporters for instigating the insurrection points to the possibility of the top Republican leader voting against Trump at a potential Senate impeachment trial,

"The mob was fed lies," McConnell in a speech delivered on the Senate floor on Tuesday (Jan 19) afternoon.

"They were provoked by the president and other powerful people, and they tried to use fear and violence to stop a specific proceeding of the first branch of the federal government, which they did not like." he added.

.@senatemajldr on the U.S. Capitol Attack: "The mob was fed lies. They were provoked by the president and other powerful people." pic.twitter.com/QIeviyHkl3

McConnell condemned “institutional failures” that left Congress “exposed” to the mob attack, but praised Capitol police for their defense of the building and of lawmakers.

“Today I want to reaffirm the huge respect and gratitude that I have—and I believe all Senators have—for the men and women of the USCP who put their own safety on the line every single day that they clock in and stand guard,” McConnell said.

McConnell had earlier rejected allegations of election fraud by Trump and his supporters, saying Trump's claims that the Nov. 3 election was stolen were partly based on conspiracy theories.

"Dozens of lawsuits received hearings and courtrooms all across our country. But over and over, the courts rejected these claims, including all star judges that the president himself had nominated," he said countering claims by the outgoing president that mandate were stoledn

"Nothing before us proves illegality anywhere near the massive scale ... that would have tipped the entire election. Nor can public doubt alone justify a radical break, when the doubt itself was incited without any evidence." McConnell had said