The Trump Presidency That We Fought For, And Won, Is Over: Steve Bannon 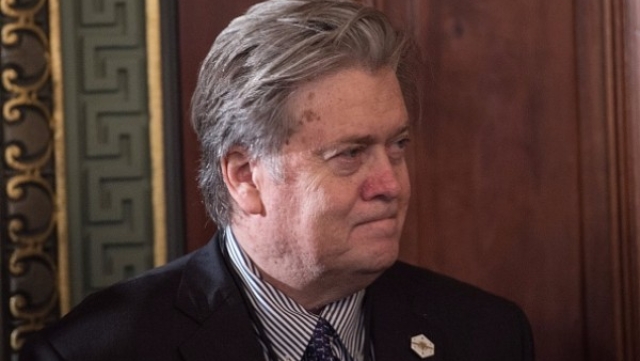 Departed White House chief strategist Stephen Bannon has said Donald Trump’s presidency, which he fought for and won, is over.

Although some suggest Bannon was fired for his stand on North Korea, which was reportedly different from the President’s, he said in the interview that he voluntarily chose to leave the White House and that he had planned his exit to coincide with the anniversary of his joining the Trump campaign.

On August 7th , I talked to [Chief of Staff John] Kelly and to the President, and I told them that my resignation would be effective the following Monday, on the 14th... I’d always planned on spending one year. General Kelly has brought in a great new system, but I said it would be best. I want to get back to Breitbart.

His role at the White House, Bannon said, was to take on the Republican establishment, which Trump agreed with. "I said, 'look, I'll focus on going after the establishment’. He said, 'good, I need that’.”

Bannon also said things will get worse for Trump in the future as “the Republican establishment has no interest in Trump’s success. There’s about to be a jailbreak of these moderate guys on the Hill,” he said.

“What Trump ran on – border wall, where is the funding for the border wall, one of his central tenets, where have they been? Have they rallied around the Perdue-Cotton immigration bill? On what element of Trump’s program, besides tax cuts—which is going to be the standard marginal tax cut—where have they rallied to Trump’s cause? They haven’t,” Bannon was quoted as saying.

Since his departure, Bannon has repeatedly tried to clear the air on his stand on the presidency. “If there’s any confusion out there, let me clear it up: I’m leaving the White House and going to war for Trump against his opponents—on Capitol Hill, in the media, and in corporate America,” Bannon told Bloomberg.

Bannon won’t be going away quietly. “Now I’m free. I’ve got my hands back on my weapons. I am definitely going to crush the opposition. There’s no doubt. I built a fuckin’ machine at Breitbart. And now I’m about to go back, knowing what I know, and we’re about to rev that machine up,” he said.