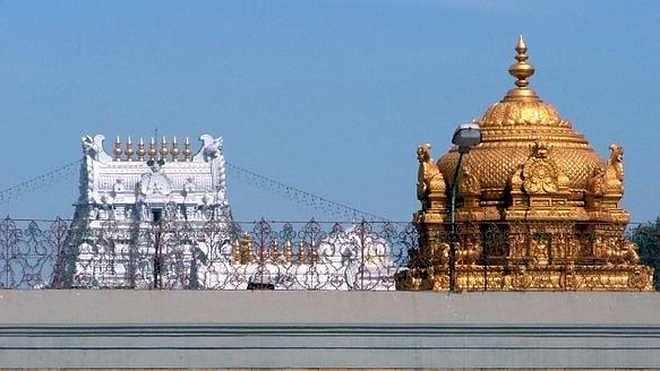 Dr A V Ramana Dikshitulu, head priest of the Lord Venkateswara Temple at Tirumala, has stacked scathing charges against the management of the country’s richest temple, accusing them of blatant interference that is violating the sanctity of the temple.

A report in Firstpost said what started as a clash between religious rites and the temple management manned by Indian Administrative Service officers, has now degenerated into trading insults by the officers in charge of Tirumala Tirupati Devasthanam (TTD) and the head priest.

Dikshitulu, who is also one of the four agama advisors of TTD, has been at the centre of controversies for taking on the administration over issues like VIP darshans, shortening of rituals and alleged commercialisation of the temple. The latest row is over Dikshitulu taking his grandson into the sanctum sanctorum of the temple for which he was issued a show cause notice by the TTD. Though Dikshitulu did not give an official clarification, he asked Firstpost unofficially that when the relatives of TTD officials can go anywhere at any time, what is wrong with children of priests, who are also practisising archakas (priests), to visit the abode of Lord Venkateswara?

"None of them have respect for the traditions or practices as laid down by agamas (vedic scriptures defining traditions and rituals in the temple) and are making changes as per their whims and fancies to promote their personal influence," said Dikshitulu, who in turn was accused of going to VIP devotees to offer ashir vachanam (blessings). To this Dikshitulu explained: "If someone falls at my feet, I normally bless them.”

He also said what’s wrong when a priest offers blessings to the same people, who the officials want to “please” to “enhance” their own personal powers.

Dikshitulu charges include officials “overdoing” the vaikhasana agama rituals and their duration and violating norms about who should be present during the rituals. “It is the wish of the officials that prevails and not the traditions,” he said.

Dikshitulu’s charges are not entirely baseless, says the Firstpost report.

The JEO of TTD has the powers of a lieutenant-governor in granting shop leases, private hotels and guest houses in Tirumala and allegations of misuse of these powers abound.

The report said the TTD is now entertaining Andhra Pradesh MLAs and MPs by sending their voters on a pilgrimage to Tirumala — with food, entertainment, travel and darshan, all free of cost. When an MLA questioned what’s was wrong in fulfilling a promise of a pilgrimage made to voters, the head priest said rituals have been cut short to accommodate the convenience of these relatives and friends of politicians and bureaucrats.

Dikshitulu, a doctorate holder in molecular biology as well as an authority on the agamas, said the officialdom should not interfere in traditions and rituals as prescribed in Vaikhanasa Agamas and Divya Prabhandas scripted by Sri Ramanuja and Alwars.

Though the TTD administration was silent over the charges by the chief priest, executive officer Anil Kumar Singhal and his assistant JEO (Tirumala) KS Srinivasa Raju said: "We are here to do a job, streamlining the administration, plug loopholes. We do not interfere in temple rituals, archakas’ appointments etc. But only when there is difference of opinion among the archaka community, we are drawn to interfere," said Raju.