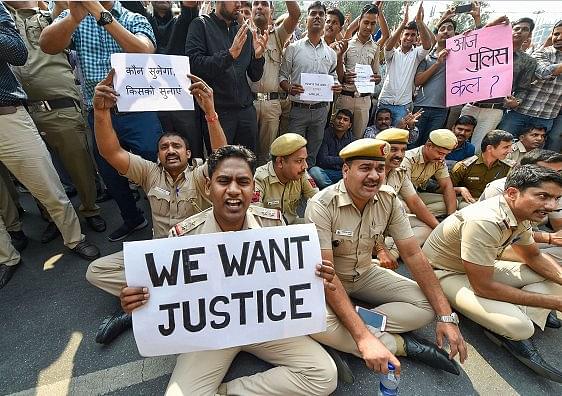 The Delhi High Court on Tuesday (5 November) turned down the bar association plea to ban media reporting of all incidents of violence, including the incident between the lawyer and police at Tis Hazari Court complex.

Instead, the court issued notice to the Bar Council of India (BCI) and other bar associations in Delhi on an application filed by the Ministry of Home Affairs (MHA) seeking modification of order on November 3 for no coercive action against lawyers who were involved in the Tis Hazari incident.

The lawyers sought a court order to ban media reporting in connection with all the incidents of violence. The court declined to pass an order.

The MHA has moved the court seeking clarity over the earlier court order that pertained to an FIR registered in connection with the Tis Hazari Court incident. The MHA said the order is not applicable to subsequent events of violence that surfaced at other court complexes.

The court, while referring to the MHA application, observed that the incident of violence has posed a big question, and it is a question of prestige for everybody. The application was mentioned before a bench headed by Chief Justice D N Patel and comprising Justice C Hari Shankar.

The BCI contested this application and termed it as an attempt to harass lawyers. The court asked the BCI to advise its members to exercise restraint and not get involved in violent acts. The BCI said it has issued a resolution today, and is in the process of resolving the matter.

The Centre's counsel contended that the violence continued after the incident, and that it should not be interpreted that no action will take on the subsequent event. "We are constrained to move this application", submitted Centre's counsel.

This application bears significance, as it is followed after hundreds of Delhi Police personnel staged protest against the department citing lack of action on the Tis Hazari Court incident. After a brief hearing, the court issued notice and it will take up the matter for further hearing on 6 November.

After an argument on parking, a scuffle broke out between Delhi police personnel and lawyers which turned into large scale violence on the court complex on 2 November. As a consequence, a lawyer received bullet injuries.

The High Court took suo motu cognizance of the matter and ordered a judicial inquiry headed by retired Justice S P Garg. The court also granted protection from coercive action against the lawyers in connection with the FIRs registered against them by Delhi Police.