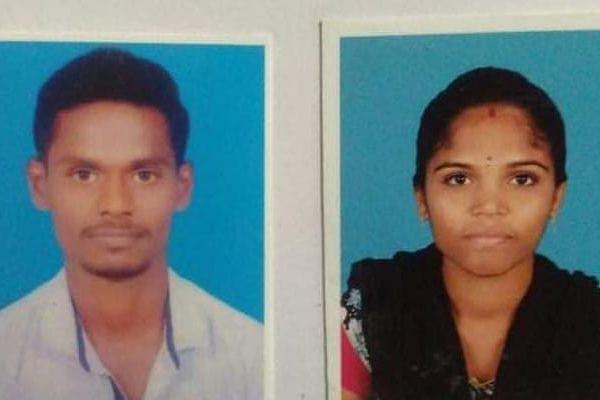 Nandish, the Adi Dravidar boy, and Swati, the Hindu Vanniyar girl, who were murdered

It was the T-shirt with a picture of Ambedkar and the slogan ‘Jai Bheem’ worn by the murdered Dalit youth, Nandish, that helped Karnataka police crack the Krishnagiri honour killing case, The New Indian Express has reported.

The name of a village, Choodaganapalli, was also embossed on the T-shirt that provided vital clues to the Karnataka police to narrow down the search.
In yet another suspected case of ‘honour killing’ in Tamil Nadu, a young couple - Nandish, a Hindu Adi Dravidar boy and Swati, a Hindu Vanniyar girl, were allegedly murdered by the bride’s family members in Dharmapuri for marrying in defiance of caste-based restrictions.

Last week, Karnataka police recovered a highly decomposed body of Nandish, 25, on Wednesday from the Cauvery near Shivanasamudra. His wife Swati’s body was fished out from a nearby spot in a similar condition the next day.

Nandish and Swati, who both hail from Choodaganapalli village in Bagalur, eloped and married in a temple at Shoolagiri on 15 August. They registered their marriage in September. The couple then moved out of the village and started living in Hosur, where Nandish was employed as a painter in a timber mart.

The Hosur police began investigating the case after a “missing person’s” complaint was filed by Nandish’s brother Sankar. In his compliant, Sankar said Nandish and Swati had gone to buy clothes and to visit a relative in a nearby village in Hosur on 10 November, but they never returned home.

According to preliminary investigations, the girl’s family assured the couple that their marriage had been “accepted” and a ceremony would be held as per their customs.

During investigations, Srinivas, Swathi’s father, allegedly confessed that he along with other family members murdered the duo. They were abducted in a multi-utility vehicle, taken to Shimsha, humiliated, strangled to death, and their bodies dumped in the river.

Tamil Nadu has been notorious for caste-based ‘honour’ killings. In less than three years before 2016, the state had witnessed 81 incidents of ‘honour’ killing. In all these incidents, 80 per cent of the victims were women.