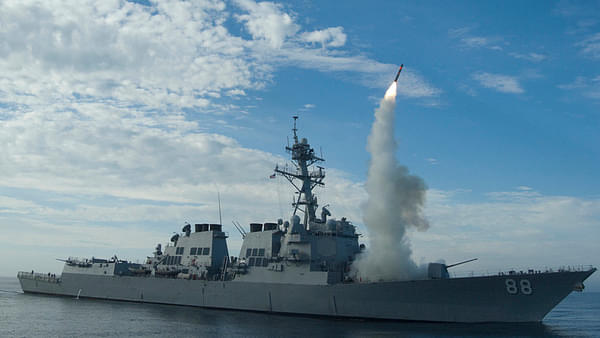 The United States on Thursday launched a military strike on the Syrian government target in response to their chemical weapon attack on the civilians few days before.

On President Donald Trump's orders, US warships launched between 50-60 Tomahawk cruise missiles at the Syria Government airbase where the warplanes that carried out the chemical attacks were based, US officials said, CNN reports. Strikes are over "until another decision is made," an US official said.

The strikes are the first direct military action the US has taken against the leadership of Syrian President Bashar al-Assad in the country's six-year civil war and represent a substantial escalation of the US' military campaign in the region, which could be interpreted by the Syrian government as an act of war.

Earlier, Trump said the chemical attack on Syria's Idlib province affected his deeply and tranformed his thinking about the Syrian president Bashar al-Assad. When asked if he would opt for military intervention to oust Assad, Trump said, “I'm not saying I'm doing anything one way or another. Militarily, I don't like to say where I'm going and what I'm doing.”

Dozens of people, including at least ten children, were killed and over 200 injured as a result of asphyxiation caused by exposure to an unknown gas on Tuesday. According to Anas al-Diab, an activist with the Aleppo Media Center, airstrikes hit the city of Khan Sheikhoun in Idlib province giving off a poisonous gas that led to this asphyxiation.

Activists said the Syrian regime dropped a chemical bomb and was responsible for the killings, leading the United Nations to replace a scheduled Security Council session for Wednesday morning with an emergency meeting. Syrian President Bashar al-Assad's military denied using chemical weapons and blamed rebels for the carnage.