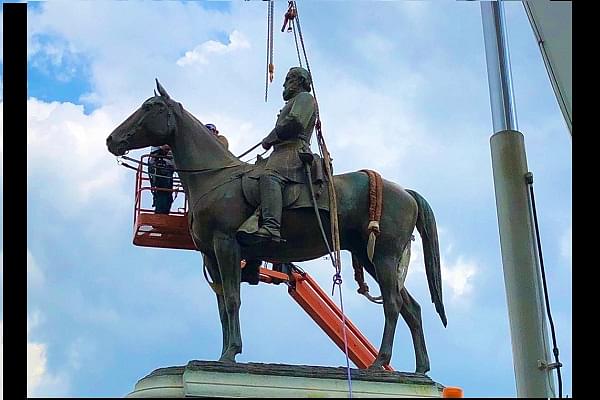 The Mayor of Richmond, the capital of US' Virginia state, has invoked emergency powers to remove multiple Confederate statues from the historic city.

The statue of Jackson, who was a slave owner and fought to preserve slavery during the American Civil War, has stood in the city for more than 100 years.

Virginia was also the former capital of the Confederacy.

But the move by Mayor Levar Stoney, a Democrat, did not specify which other statues he planned to remove from Richmond

"It is past time," Stoney said in a statement on Wednesday.

"As the capital city of Virginia, we have needed to turn this page for decades. And today, we will."

The Mayor also cited the "threat to public safety" some of the city's controversial statues pose as a reason for using his emergency powers.

The city's move came as a number of cities and states across the country have removed in recent weeks statues and other symbols that honour Confederate leaders amid a national reckoning with America's racist past in the wake of George Floyd's death in the hands of a white police officer on May 25.

This development came on the same day the US House Armed Services Committee voted to approve an amendment to ban the public display of the Confederate battle flag on all Pentagon property.

The measure was approved without debate by voice vote as part of a package of non-controversial amendments to the National Defence Authorization Act, according to a report from The Hill.

The House panel is also expected to consider an amendment later that would require the Pentagon to strip Confederate names from bases and other property within a year.

On Tuesday, Mississippi Governor Tate Reeves signed a legislation into law to officially removing a Confederate battle emblem from the state flag.

The state's lawmakers on Sunday overwhelmingly voted to replace the flag.

A commission will design a new flag that does not include the Confederate symbol broadly condemned as racist, said local media reports, and the new design will go before voters in November for approval.

The state flag, adopted in 1894, nearly 30 years after the end of the Civil War, is the last in the US to feature the Confederate battle emblem.

The flag was originally used by the slave-owning states who lost the US Civil War (1860-65).