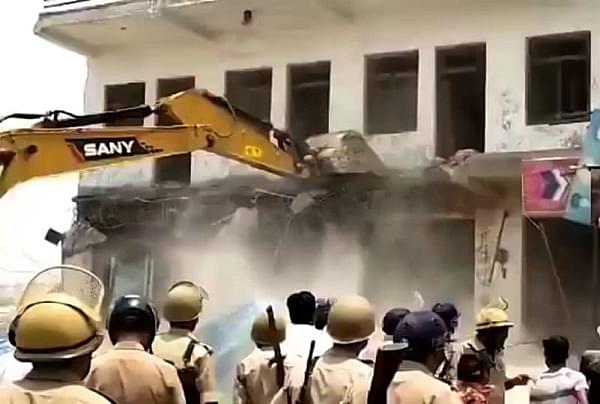 The SP leaders had allegedly encroached upon the land of Chilasani gram sabha to construct a market complex and a farmhouse.

The former MLA had been living in the farmhouse along with his family for the past 20 years.

The SP had recently declared Jogendra Yadav's wife Rekha as its candidate for the post of district council president.

Additional District Magistrate Vivek Mishra said, "After receiving several complaints, an investigation was conducted and it was found that the two had encroached upon government land to construct a market complex and a farmhouse. The illegal properties have been demolished and based on an FIR registered, the police will take further action."

Terming the demolition "unlawful and politically motivated", SP district president of advocate wing Akash Yadav said, "The matter is sub judice and the court had ordered a stay on the owners' plea. We will take legal action against the district administration. SP workers will not bow down to the dictatorship of the state government."

In the past week, the police had registered FIRs in four different cases of alleged land grabs and illegal constructions.

Meanwhile, targeting the state government and the district administration, Rajya Sabha SP MP Prof. Ram Gopal Yadav said, "BJP had managed to win only two of the total 30 seats of the Etah panchayat elections. The BJP government has now got the administration to demolish the market of the former MLA and cases were registered against his entire family. His 20-year-old residence was also demolished. Besides, we have information that police are going to register a fake rape case against Jogendra."

The senior SP leader also alleged that the state government had planned to get Rekha Yadav's nomination cancelled.