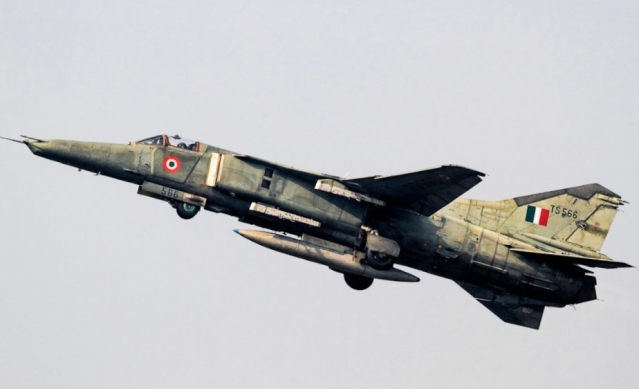 A MiG-27 fighter jet of the Indian Air Force, which had taken off from the Jodhpur airbase, crashed in a field near the city earlier today.

The pilot was able to eject safely from the jet, which "burst into flames and was completely destroyed in the crash," reported India Today.

"The pilot ejected safely. A Court of Inquiry will investigate the cause of the accident." the Air Force has said in a statement.

NDTV reported that Air Force officials have arrived at the crash site.

According to the report, photographs from the crash site showed a huge fire and debris in a small area. Locals had gathered around the crash site.

Hereâs a video of the crash site. The MiG-27 crashed at 9.02am, a little over 10 minutes after take-off from Jodhpur. pic.twitter.com/aW8CAT88Is

"On seeing the dry field at Deoria lit up, villagers informed the local authorities, which sent some fire trucks to control the situation," the report adds.

At least 31 aircraft of the IAF have been involved in accidents in the last four years, Minister of State for Defence Subhash Bhamre had disclosed in a written reply to a question in the Lok Sabha in March, PTI had reported.