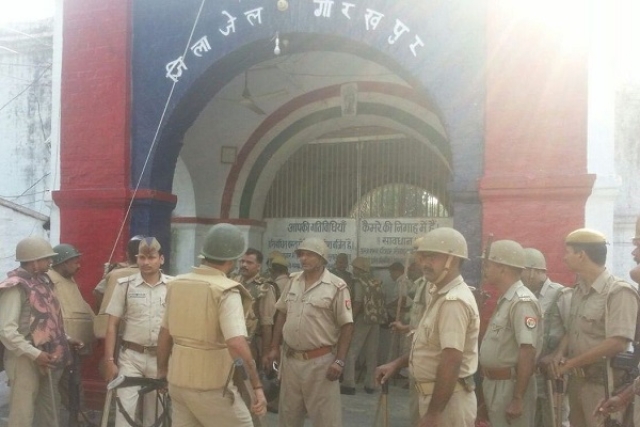 The entrance of Gorakhpur Jail. (@ANI/Twitter)

Prisoners in Uttar Pradesh's Gorakhpur district jail went on a rampage on Friday (11 October) and police had to deploy drones to monitor them.

Conflicting reports were emerging from the jail with some saying that the security personnel including the deputy jailer were attacked by the inmates, but the administration has denied this.

It is being reported that the prisoners were protesting against the thrashing of inmates by the police.

As per the reports, a criminal who was being taken to the jail in a police van from a court on Thursday (10 October) evening, created a ruckus inside the van. On being informed of the incident, Circle Officer Praveen Singh reached the district jail on the same night and thrashed the criminal and other inmates, one of whom received serious injuries in the leg.

On Friday morning, the inmates protested against the beatings and attacked the deputy jailer Prabha Kant Pandey and security guards.

The prisoners also vandalised the office inside the jail premises and it took considerable effort to rescue the deputy jailer and other security personnel. The injured were admitted to the jail hospital.

District Magistrate Vijendra Pandiyan and Senior Superintendent of Police (SSP) Sunil Gupta reached the district jail and tried to pacify the inmates, but they were unwilling to relent. They pelted stones at the officials.

Additional District Magistrate Rakesh Shrivastava told IANS: "We got this information at 7 am that there was some sloganeering going on inside the jail premises. We all reached there and spoke to the inmates. They said the food that was being served to them was bad and the jail authorities were not doing anything about this. We listened to them and then they went back to their barracks."

He said that a brawl had broken out among the inmates, but there was no incident of anyone being thrashed.

Even as the administration seemed to play down the incident, drones were being used to monitor the activities of the prisoners inside the jail premises. Additional forces have been deployed inside the jail and senior officials are monitoring the situation.