Watch: A Moving Sindhi Song By Hindus Protesting Against Islamist Persecution In Pakistan 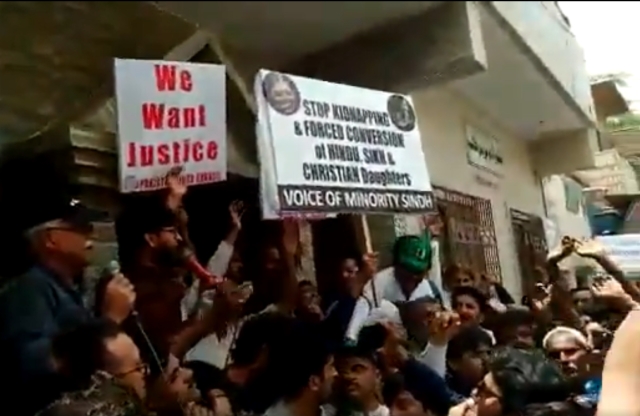 In a video going viral on social media, a Sindhi Hindu man is heard singing a song that moved the viewers to tears. The video shows a protest organised by the Hindu community in Pakistan in response to abduction of minor Hindu girls, forced conversions, and Islamist persecution.

The lyrics of the song go ‘Asaan Sindh Ja Asal Varis Aahiyoun, Samjho tha Aasaan Laawaris Aahiyoun’ (we are son/daughter of Sindh - and you think - we are orphan).

My eyes brimmed with tears by watching it

Sindhi Hindu protested against forced conversion. One of protesters sang in Sindhi, âAsaan Sindh Ja Asal Varis Aahiyoun, Samjho tha Aasaan Laawaris Aahiyounâ [we are son/daughter of Sindh - & you think - we are orphan]

Several incidences have been highlighted by the activists and mediapersons where underage Hindu girls were abducted, forcibly converted to Islam and married off to Muslim men much older than them.

The video comes after a Hindu girl, 14-year-old Pooja Kumari was abducted from Hyderabad in Pakistan. Pooja Kumari’s uncle Ramesh Kumar said that the abductors kidnapped Pooja at midnight. Also, two Hindu girls from Kohli community were abducted, converted to Islam and then married off to men at Kunri, Sindh. According to parents, the girls were minors.