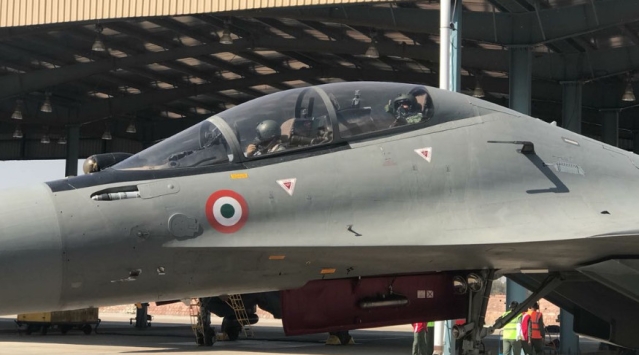 Defence Minister Nirmala Sitharaman in the cockpit of the Sukhoi-30 MKI before taking off for a sortie. (Indian Air Force/Twitter)

#WATCH Jodhpur: Defence Minister Nirmala Sitharaman gives a thumbs-up as she takes off for a sortie in the Sukhoi-30 MKI. pic.twitter.com/aWGr9LtYw3

The first full-time female Defence Minister sat in the rear seat behind the pilot on the two-seater fighter. She has, in the last few months, visited a number of army, navy and air force bases across the country to boost the morale of the armed forces and assess their operational preparedness. Last week, Sitaraman spent a day on the aircraft carrier INS Vikramaditya, presiding over Indian Navy’s show of might off the western coast involving ten warships.

VIDEO: Defence Minister @NSitharaman takes off in the back seat of a Su-30MKI at Jodhpur air force station. #RakshaMantriFliesSukhoi pic.twitter.com/7rFvLVuJIY

Inside view of the cockpit during Smt @nsitharaman 's sortie on the Sukhoi-30 MKI #RakshaMantrifliesSukhoi pic.twitter.com/di7zNKiDhw

“Very proud and thankful that I’ve gone through this experience because it actually tells me with what rigor, practice, what level of readiness and how quickly they (defence personnel) have to respond to situations. It was eye-opening and memorable,” said Sitharaman after the sortie.