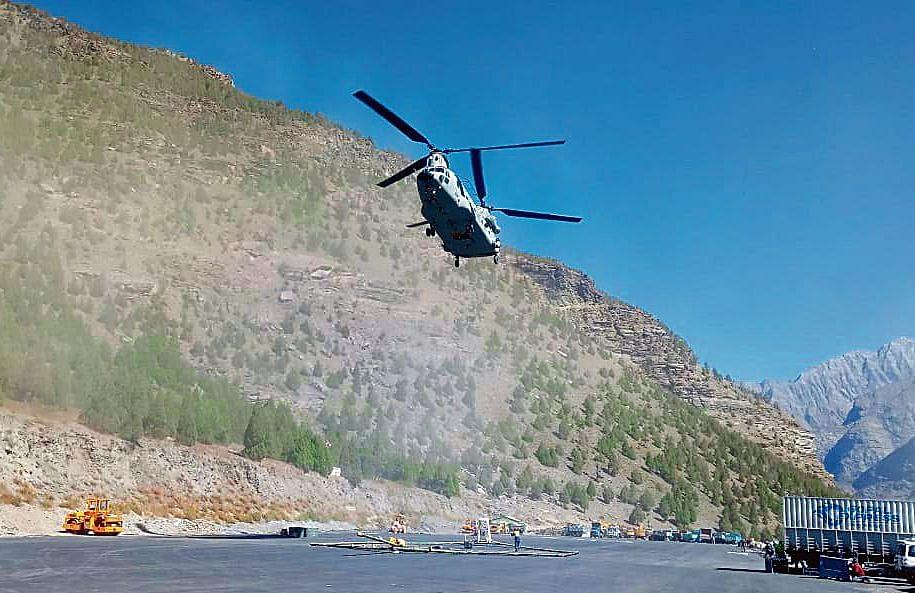 With the completion and opening of the Rohtang Tunnel, the focus of Indian agencies involved in the construction of strategic infrastructure in the border areas has shifted to the Shinku La Pass, where a 13.5-kilometer long tunnel is proposed on the Manali-Darcha-Padum-Kargil-Leh route.

The Narendra Modi government has fast-tracked work on this project to build an alternate route to Ladakh from Himachal Pradesh.

Last month, an airborne electromagnetic survey of the site where the tunnel is proposed was carried out by the National Highways and Infrastructure Development Corporation Limited with help from the Indian Air Force (IAF).

As part of the survey, a Boeing Ch-47 Chinook helicopter of the IAF was used to lift a large antenna as an underslung load over the hill features in the area.

Electromagnetic surveys are done in large and inaccessible terrain to get a clear, three-dimensional picture of subsurface structures.

The huge antenna required for the electromagnetic survey was assembled by four engineers from Gujarat and Denmark in two days.

For this survey, the IAF’s Chinook helicopter took off from the Stingri helipad near the town of Keylong in Lahaul and Spiti district of Himachal.

A trial was conducted on 15 October and the survey began on 19 October.

The construction of this tunnel will ease the movement of troops and equipment to the border with China significantly. Reports say the tunnel will reduce the distance between Manali and Leh by around 250 kilometers.

Amid tensions with China in eastern Ladakh, work on border roads and related infrastructure has been fast-tracked by the government.