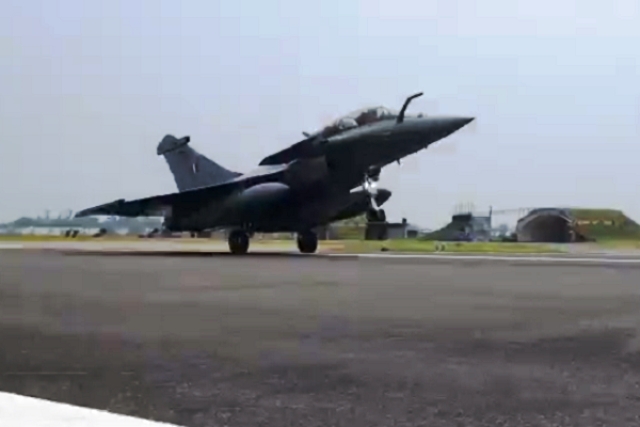 Rafale touches down at Ambala

Defence Minister Rajnath Singh on Wednesday (29 July) shared a spectacular video of the first Indian Air Force's Rafale fighter jet touching down on the runway of the Ambala Air Force base.

The Touchdown of Rafale at Ambala. pic.twitter.com/e3OFQa1bZY

Defence journalist Shiv Aroor also shared a video of the Rafales receiving a ceremonial water cannon welcome after landing at the air base.

In the video one can hear the intense sound of the twin Snecma M88 engines as a photographer captures the footage of the Rafale touching down at the runway.

The aircraft was being flown by Group Captain Harkirat Singh who will be the commanding officer of the Golden Arrows squadron.

The squadron comprising of 18 Rafale fighter jets will provide a strategic edge to India over its enemies. The strategic Air Force Base is almost equidistant from the Line of Actual Control and the Pakistani border.