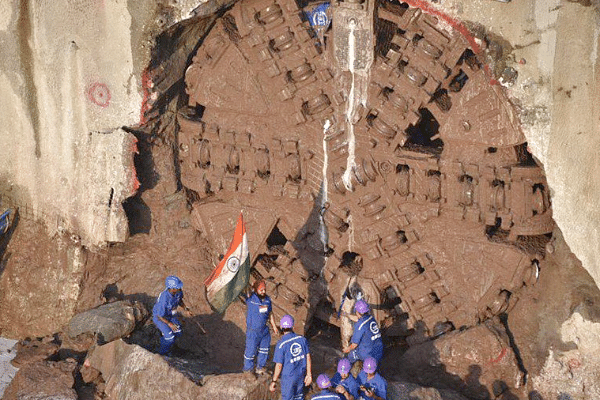 The fully underground metro corridor from Colaba to Seepz via Bandra has achieved a milestone in its progress with its first tunnel breakthrough. This will be the city’s first underground metro corridor stretching for 33.5 km. Tunnel boring machine Wainganga 1 has achieved the feat by digging the earth from Marol to the city’s international airport.

Witnessing the breakthrough was the Chief Minister of Mahrashtra Devendra Fadnavis. DNA quoted him as saying, “The state government has embarked to complete 270-km-long Metro network in the next three-four years and Metro-3 is an important part of the same. It’s a step towards safer, more comfortable and faster mode of transport to be made available for citizens of the city.”

He also tweeted a video of the ceremony:

A team of 250 engineers, mechanical and technical workers came together to make the mark. The project was commissioned in January this year. Starting at Pali ground in Marol, Wainganga completed its first tunnel breakthrough of 1.26 km.

An average of 4.6 metres was achieved on a daily basis for 259 days to finish the first stage of progress. Once operational, the Metro-3 project will handle more than 15 lakh passengers a day. It is expected to be functional by 2022.

The 92-metre long Wainganga bored an average 4.6 metres daily, shaping the tunnel with 901 RCC cement rings. The MMRC has so far completed about nine kilometres of tunnelling and has generated and disposed of 19,40,254 cubic metres of muck. The total length of the Colaba-Bandra-SEEPZ metro is 33.5 km.

Electrification, strengthening and planting of railway tracks will be undertaken later.