Watch: Statue Of Lenin Brought Down In Tripura Nearly 48 Hours After The End Of Left’s 25 Year Rule 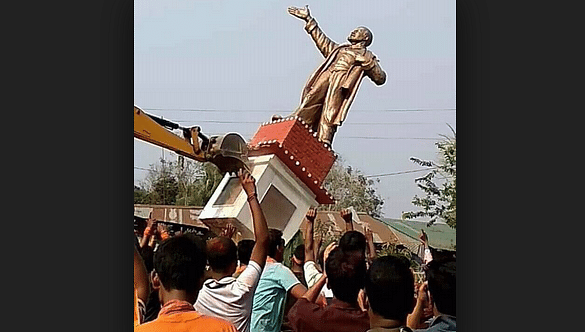 Statue of Lenin brought down in Tripura.

Nearly 48 hours after the defeat of the Communist Party of India (Marxist) in the assembly elections at the hands of the Bharatiya Janata Party (BJP) in Tripura, a statue of communist leader Vladimir Lenin was pulled down using a bulldozer.

The statue, which stood at the centre of the College Square in Belonia town for the last five years, was brought down amid cries of “Bharat Mata Ki Jai’’. It was installed after the CPM’s victory in the 2013 elections.

The BJP’s victory in the state has brought to an end the 25 years of uninterrupted Left Front rule in the state. The BJP won 35 seats on its own. Its ally, the Indigenous People's Front of Tripura, was victorious in 8. The BJP, which contested in 51 seats, has secured 43 percent of the votes. The IPFT got 7.5 per cent votes.