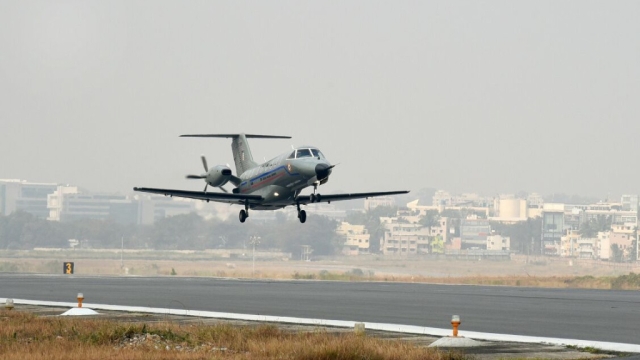 The upgraded version of India’s indigenous transport aircraft made its maiden flight in Bengaluru on Wednesday, nearly nine years after one of the prototypes of the plane crashed, killing the three-man Indian Air Force test crew on board.

The twin push-propeller aircraft, called SARAS, could be used for civil transport, logistics and specific military roles in the future.

According to Livefist, the aircraft took off from Bengaluru’s Hindustan Airport for a 40-minute flight at 11 am. It was piloted by a team from the Indian Air Force’s Aircraft & Systems Testing Establishment, which falls under the Training Command. An HJT-16 Kiran trainer aircraft followed the plane during the flight.

The aircraft reached the maximum height of 8500 feet at the speed of 145 knots.

According to reports, the aircraft is designed to cover 1,600 kilometres at a speed of 425 km per hour and fly continuously for five hours.

The Indian Air Force has, in the past, expressed interest in acquiring 15 SARAS aircraft. However, the National Aeronautics Laboratory (CSIR-NAL), which is developing the aircraft, wants the air force to acquire at least 50 aircraft.

The first prototype of the plane had made its first flight in May 2004. The project was all but shelved after a prototype of the aircraft crashed in 2009 on the outskirts of Bengaluru. It was revived after an investigation by the Directorate General of Civil Aviation. The investigation, according to CSIR-NAL Chief Jitendra J Jadhav, had absolved the laboratory of design deficiencies.