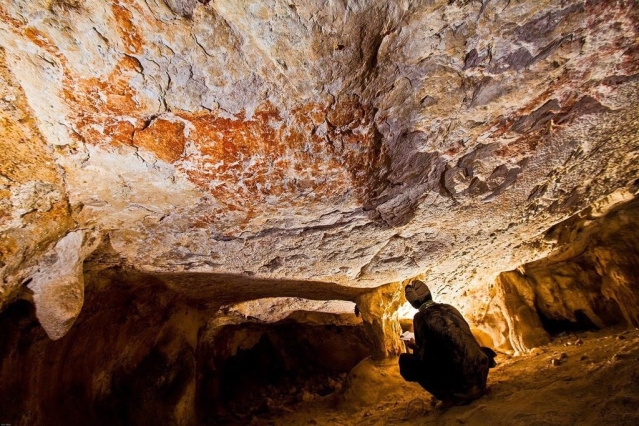 A 40,000-year-old painting of a cow in the Borneo caves is now the oldest cave painting by man. (image- Enlightened Ape (@Harvcaster) via Twitter)

A new study finds a 40,000-year-old painting of a mysterious, wild, cow-like beast as the oldest animal drawing by humans on record. Live Science reports researchers discovered the painting in a Borneo cave.

Speaking about figurative paintings, Maxime Aubert, an archaeologist and geochemist at Griffith University, Australia, said, "Initially, humans made the figurative painting of large animals, and they later started depicting the human world".

Researchers discovered the paintings in the isolated mountains of East Kalimantan province in Borneo, Indonesia, in 1994. Until now, they were unable to find out when the drawing was from, says Maxime Aubert who is also the co-lead researcher of the study.

After working alongside the National Research Centre for Archaeology (ARKENAS), Indonesia, and the Bandung Institute of Technology (ITB), the researchers used uranium-series dating on the calcium-carbonate samples collected from the cave to determine the age of the initial coating.

The painting of the mystery animal is possibly a species of the wild cattle, which moved around in and around the jungles of Borneo before 40,000 years. This discovery trumps the discovery of the 35,400-year old babirusa (pig-deer) painting by man.

The study was published online on 7 November in the journal Nature.