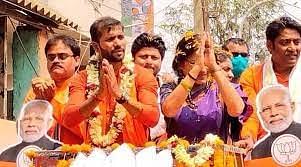 It was mainly a two-cornered fight in Moyna as the Congress’ Manik Bhaumik finished a distant third with only 5108 votes to his name.

Dinda, who has been a stalwart for Bengal in domestic cricket, joined the BJP in February ahead of the assembly elections.

Expressing his gratitude at being elected to the legislative assembly, Dinda tweeted, “Thank you Moyna for believing in me.”

Thankyou Moyna for believing in me pic.twitter.com/tGHDD4l9VO

Dinda represented Bengal in various domestic cricket competitions for around 15 years from 2005-19. Within this time period, he developed to become a pillar of the stateside and even played internationally in 13 ODIs and nine T20Is.

He is a native of Moyna, which falls in the Purba Medinipur district of the eastern state. The constituency had gone into polls in the second phase of elections on 2nd April.

However, Dinda was allegedly attacked by TMC goons as he was in his car whilst rounding up his work on the final day of the election campaign on 30th March.

The BJP in total has emerged victorious in 77 seats in the assembly elections, as per official data of the Election Commission of India.