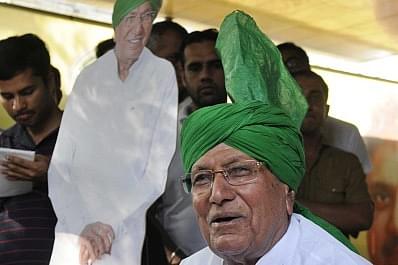 Hisar MP Dushyant Chautala and his brother Digvijay have been expelled from primary membership of Indian National Lok Dal (INLD) by party supremo and their grandfather Om Prakash Chautala on Friday (2 November), as reported by The Tribune India.

The sons of the patriarch’s elder son Ajay Singh, who is serving a jail sentence along with the supremo himself in the JBT recruitment scam, had been served show-cause notices and suspended for “anti-party activities” on 10 October.

Dushyant also lost his post as the leader of the INLD parliamentary board. The expulsion has come a month after an incident at INLD’s Gohana rally laid bare the tension within the Chautala clan.

Slogans demanding that Dushyant be named the chief ministerial candidate were repeatedly raised interrupting the speech of his uncle Abhay Singh at a rally conducted on 7 October. Notices were issued to Dushyant and Digvijay for indiscipline and spreading disaffection against the leadership.

Dushyant’s mother Naina Singh, who is Dabwali MLA, had said earlier this week, “My sons never demanded any post, nor desire to be CM... In a democratic set-up, it is the people who have the right to elect their leader.” She also held a faction of the party responsible for her sons’ suspension.

“It was not an easy decision. But Chautala decided to adhere to the principles of party founder Ch Devi Lal, for whom the party was bigger than any individual,” said a party source.

The decision to expel them comes at a precarious time for the family as OP Chautala is in jail and Ajay Singh will be out on parole for 14 days on 5 November. His son, now expelled Digvijay has stated, “Papa (Ajay Singh) alone will speak on the matter when he is out on parole.”