World's Largest Solar Tree Developed By CSIR-CMERI, Can Be Used To Generate Clean And Green Power For Agri-Operations 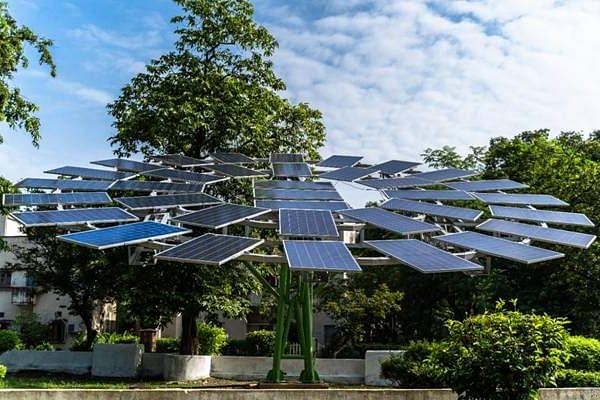 The Central Mechanical Research Institute (CMERI), under the Centre for Science and Industrial Research (CSIR), has developed and installed the world's largest solar tree at Durgapur, West Bengal.

The Solar Tree, which is installed at CSIR-CMERI Residential Colony, Durgapur, can generate peak power of over 11.5 kilo watt (KWp).

According to a statement by Ministry of Science and Technology, Professor Harish Hirani, Director of CSIR-CMERI, while elaborating about the technology stated that, “The installed capacity of the Solar Tree is above 11.5 kWp. It has the annual capacity to generate 12,000-14,000 units of Clean and Green Power”.

The Solar Tree has been designed in a manner to ensure maximum exposure of each solar photovoltaic (PV) panel to sunlight and also creation of the least amount of shadow area beneath. There are a total of 35 solar PV panels in each tree with a capacity of 330 wp each, the ministry said.

The inclination of the arms holding the solar PV panels are flexible and can be adjusted as per requirement, this feature is not available in Roof-Mounted Solar facilities. The energy generation data can be monitored either real-time or on daily basis.

“The CSIR-CMERI developed Solar Tree besides being the World’s Largest Solar Tree also has certain customizable features for application at diverse sites. The Solar Trees were designed in a manner to ensure minimum Shadow Area, thus potentially making these Solar Trees available for widespread usage in Agricultural activities such as High Capacity Pumps, e-Tractors and e-Power Tillers," said Professor Hirani.

The Solar Tree has the potential to save 10-12 tons of CO2 emissions being released into the atmosphere as greenhouse gases when compared with fossil fuel fired energy generation. Besides, the surplus generated power can be fed into an energy Grid, the ministry said.