Beef Eating Dalits - Where Are They? 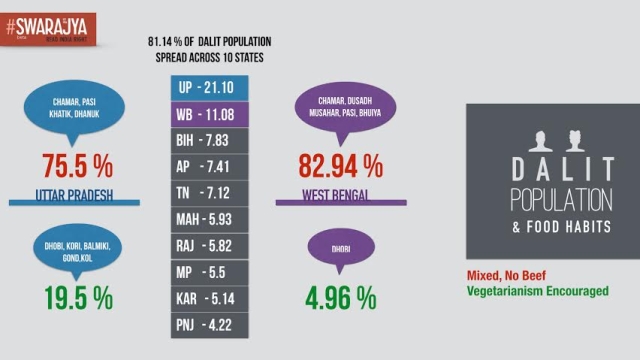 The attempt to club all Dalit groups under an omnibus category of “Beef Eaters” is clearly an attempt to score a propaganda point.

Beef eating has long been a bitterly fought battle for gastro-political contestations. It cannot be denied that food habits did play an important role in determining the pecking order in the Hindu social hierarchy. And notions of purity were driven by food. Several eminent scholars have persuasively argued that the concept of untouchability in Hindu society could be potentially rooted in culinary practices.

A couple of months back, President Pranab Mukherjee gave his assent to the Maharashtra Animal Preservation (Amendment) Bill.  This in effect outlawed the slaughter of calves and bullocks completely. Cow slaughter has been illegal in the state since 1976. Haryana too followed suit.

The legal manoeuvring by these two states, while consistent with Directive Principles of State Policy in the Constitution of India, resulted in widespread outrage. While hurling of hyperbolic accusations- ‘culinary fascism’, ‘assault on dietary diversity of India’ etc.- can be dismissed as divisive political  rhetoric, contentions like beef being the sole source of protein for poor, impoverished Dalits deserves serious examination

We looked at the Dalit groups in key Indian states and mapped their food practices. It emerges that the majority of Dalits do not eat beef. The attempt to club all Dalit groups under an omnibus category of “Beef Eaters” is clearly an attempt to score a propaganda point.