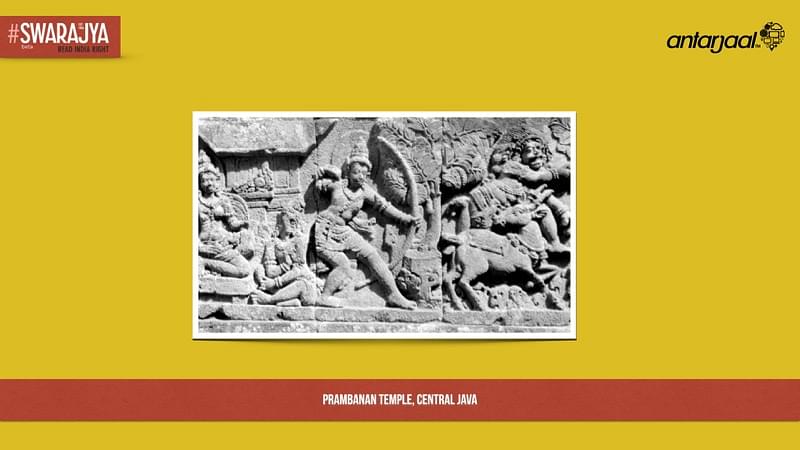 In this edition of ‘Poetry In Stone’ we bring to you relief depictions of one of the crucial points of the Ramayana– the Mareecha episode.

Mareecha, a master sorcerer, was the demon that took the form of a golden deer with silver spots to mesmerise Sita, thereby triggering the most important twist in the story of Ramayana. But it was not a choice that the demon made jumping with joy; it was a humble acceptance by Ravana’s uncle, of the fact that his time had come.

Mareecha then, transformed into a beautiful deer and pranced around to get the attention of Sita. The deer is said to have led prince Rama deep into the forest and when struck by an arrow, Mareecha emerged out of the deer’s body with a loud cry, in Rama’s voice, to create panic in the heart of Sita and Lakshmana. In brief, what followed was Lakshmana going on the deer’s trail and Sita being abducted by Ravana.

In today’s column, we look at three depictions of this episode found in ancient and medieval temples.

A depiction of Rama attacking Mareecha can be found at the Tarakeshwara temple at Hanagal a town in the Haveri district of Karnataka.

The artist has depicted the story in three panels using small pillars as boundaries.  In the panel at centre, the deer has been has struck by an arrow that clearly cuts through the neck. Mareecha is shown coming back to his demonic form and giving out a shout.

The panel on left shows Rama and Sita looking at the deer. Sita is shown standing behind Sri Rama suggesting her asking him to bring the deer for her. The panel on the right has Sri Rama shooting the arrow from his bow.

Though there is very little detailing, the story comes through clearly.

The Hazararama temple in Hampi is well known for its wall carvings depicting the Ramayana all around the temple. It is because of this that the temple is called the “Hazara Rama”.

On the left panel above, Sita is directing Rama to look at a beautiful deer that she has spotted. Rama and Sita seated next to each other are carved on one stone while the deer is independently carved on the stone adjacent.

Another panel shows Rama taking aim at Mareecha in a half-deer-half-man form. Rama is ready to release the arrow even as Mareecha seems to be running away to lead him deep into the forest.

In these reliefs, though the artist captures each moment, they fail to deliver the drama and depth.

Prambanan is a 9th century Hindu temple in Central Java, Indonesia. This temple is dedicated to the Trimurti – Brahma the Creator, Vishnu the Preserver and Shiva the Destroyer.  This is the largest Hindu temple in Indonesia and one of the biggest in Southeast Asia.

The temple is adorned with panels of narrative bas-reliefs telling the stories of the Ramayana and the Bhagavata Purana. On one such relief is the story of Mareecha.

Rama, Sita, the deer (Mareecha) are all well detailed. The arrow shot by Rama has pierced through deer’s belly and has forced Mareecha to jump out screaming. The tree in the background adds depth to the carving.  Rama and Sita both have smiles on their face while Mareecha is definitely in pain.

Artistically this relief is superior to the ones found in the Tarakeshwara or the Hazararama temple.