Ten things You May Not Have Known About Pather Panchali 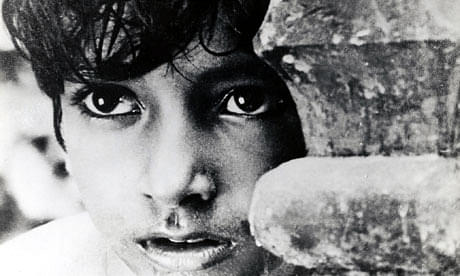 Pather Panchali (English: Song of the Little Road) turns 60 this year. The movie, made by what apparently seemed like a group of novices on a shoestring budget, had premiered at New York’s Museum of Modern Art on May 3, 1955. Later, in August that year, it released in India. It launched Satyajit Ray’s brilliant career, shot India into global prominence in the world of avant-garde cinema, went on to win several national and international awards including for the ‘best human document’ at the 1956 Cannes Film Festival and established itself as a masterpiece for all times.

The movie was adapted from Bengali writer Bibhutibhushan Bandhopadhyay’s 1928 novel of the same name. Pather Panchali is set in Nishchindipur, a fictional hamlet in rural Bengal, a kind of an Everyplace.  The plot is remarkably simple: Harihar, an indigent Brahmin priest struggles to provide for his family, which includes his wife Sarbajaya, daughter Durga and son Apu. Indir Thakrun, the old lady present through a part of the movie, is his aged cousin. The story may have been age-old but the treatment it received was all new: a film shot on a low budget, on-location shooting, no use of make-up, no sudden breaking out into song and dance, use of (mostly) non-professional actors and realistic lighting, it broke almost every rule of conventional filmmaking in India.

Ray chose Pather Panchali because he found it to be one of the most “filmable” of Bengali novels, hoping too that the public interest in the classic would “outweigh its distrust of a new director”. Of the finished product, perhaps there was no greater and more eloquent praise than from Ray’s peer, Japanese filmmaker Akira Kurosawa, who said that it was the kind of cinema that flowed “with the serenity and nobility of a big river”.

Ray’s trouble in getting a financier for his movie is well-known. Producers remained unconvinced about what he was attempting; a producer who funded the first phase of shooting soon went bankrupt, incurring losses from a different venture. After pawning his wife’s jewellery and selling his rare books and records proved inadequate too, Ray approached Dr Bidhan Chandra Roy, then chief minister of West Bengal. Dr Roy agreed, but insisted on a happier, more affirmative ending instead of the tragic abandonment of home and hearth by Apu and his parents. He was told that Bibhutibhushan’s family would never agree to it, and the reading public would be aghast if such a change was made.

The apocryphal story: Since the government had no overheads to finance a feature film, the responsibility was given to the Public Works Department, given that the film was about ‘roads’.

There were two ways to select a child actor who would play Apu: one was to go to schools and look for physical resemblance. When that failed, Ray put out a newspaper ad, asking parents to bring their six and seven-year-old sons to a particular address at a particular time. Among those who turned up was a girl, who had come “straight from the barber’s with her hair cut short and powder at the base of her neck”. As it happened, the boy who played Apu (Subir Banerjee) was spotted by Ray’s wife, playing on the roof of a house next to theirs.

3. A harbinger of good times

In the days that Ray waited to hear from Dr BC Roy about government funding, a white owl came and perched itself on the sill of his bedroom window. White owls were locally associated with Laxmi, the goddess of wealth, so the Rays’ neighbours tried to lure it away by offering food. The owl refused to budge, even when its photographs were taken, and came and sat at the same spot for three consecutive days.  As Ray’s wife Bijoya writes in her autobiography Manik and I, “no one knew where she had come from, or where she went”.

Chunibala Devi, who played the role of the eighty-year-old aunt of Durga and Apu, was a stage actress but inactive for several decades and quite forgotten by the time Pather Panchali was shot. She readily agreed to the part and never gave any trouble, as long as she had her dollop of opium with her afternoon tea. Her remuneration? A princely sum of Rs 20 per day. She lived just long enough to complete the film but passed away before it was released.

One of the first scenes to be shot, on an experimental basis to offer credible footage while trying to convince producers, was Apu and Durga’s first sighting of the train while playing in a field full of kaash flowers. (Kaash, white and fluffy, is a seasonal flower, blooming in autumn for a span of around two months.) The shooting was being done on consecutive Sundays. On the team’s arrival on the second Sunday, they found the kaash all gone, and the field covered with “brownish grass”. A local explained that the flowers were food for the cattle and that the “scenery” had been “chewed up” by cows and buffaloes.

When it eventually released in New York in 1958, Pather Panchali ran for eight months at the Fifth Avenue Cinema. It evoked all kinds of response: while most members of the audience were left stunned by the artistry, some were appalled too. Ray writes, “…there was an American lady, for instance, who was so upset by the spectacle of Indians eating with their fingers that she had to leave the theatre as soon as the second dinner episode commenced”. Elsewhere, filmmaker Francoise Truffaut (reportedly) stormed out complaining about the slow pace of the movie while the Apu trilogy left an indelible impact on a teenage Martin Scorsese.

Even as Pather Panchali made its way to the 1956 Cannes film festival, Ray himself had stayed back in India. The official screening at Cannes took place around midnight. By then, the jury had already seen four long features that day and decided to skip the Indian entry. As it happened, a handful of critics who sat through the film liked it enough to insist on a second screening for jurors. The movie went on to win a special prize as the ‘best human document’.

Durga’s death took place while her father Harihar was away and he remains unaware of it till he returns home. While shooting for that scene, Sarbajaya’s “grief-stricken outburst” did not sound right to Ray’s ear, and he decided to substitute the lamentation with a “high-controlled instrument like the tar shehnai, which would suggest grief”.

Much has been written about the influence of Italian Neorealism on Pather Panchali, but in his book ‘The Cinema of Satyajit Ray: Between Tradition and Modernity’, writer Darius Cooper argues that Ray was also influenced by the emotion-centred form of the rasa-theory in the making of Pather Panchali, as well as Aparajito and Apur Sansar, the other two movies in the Apu trilogy. The concept of rasa centres on not only the feelings experienced by the characters but those feelings being conveyed in an artistic way to the audience. Cooper analyses Sanskrit theoreticians like Dandin, Anandvardhana and Abhinavagupta to probe how rasa theory as espoused by these scholars influenced Ray and his works.

Pather Panchali was an instant box-office hit in Bengal, long before it became successful abroad, which might offer an interesting counter-point to the widely-held belief that it is the audience that dictates the dumbing down of content. Nevertheless, the film industry didn’t take kindly to it. Movie star and then Member of Parliament Nargis’s accusation that Ray was “exhibiting India’s poverty abroad” was part of that response. As noted film critic Chidananda Das Gupta wrote in Seeing is Believing: Selected writings on Cinema, if “they could have had their way, [they] would have been content to ban it altogether”.