Why Think A Woman Can't Kill You? 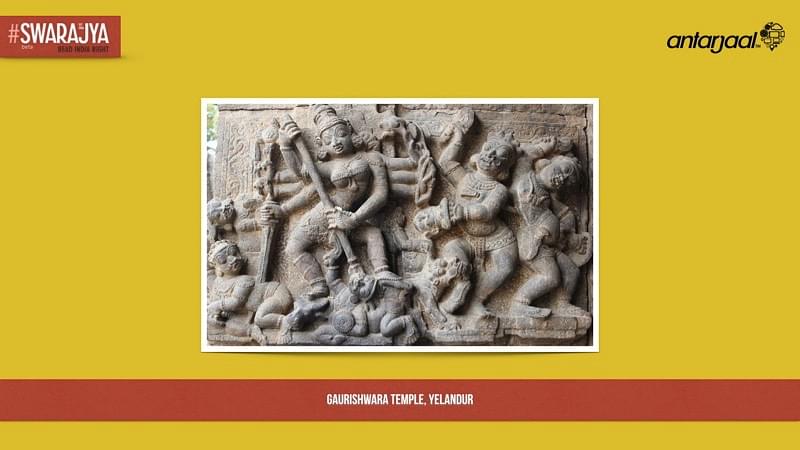 Mahishasura, the buffalo demon, born to Mahishi a she-buffalo succeeded his father Rambha to become the king of Asuras. Like all asura kings, his agenda too was to overpower devas and reign supreme over the three worlds.  To achieve victory, Mahisha on advice of the asura guru Shukraacharya, entered into a penance to appease Brahma, the creator to grant him immortality. Brahma appeased with penance appeared and explained that everything created had to have an end, but a choice could be made of who or what could cause the end.

Mahisha made his choice – no man, god or animal can end his life except a woman. A choice made with callous assumption that a woman can never be strong enough to harm an asura more powerful than animals, men and even gods.

Taking charge of the asura army, Mahisha wreaked havoc on all the worlds, waged a war and won the heavens. Praying for help gods took refuge with the Trimurtis, but they too could do nothing on their own.  Only a woman could save them and such a woman didn’t exist.

Vishnu proposed creating a new celestial woman – a goddess, who is the sum of all the strengths of all the gods, one who could be their creation yet be considered their creator for giving them a new life.  The gods made their choice.

Mahalakshmi, Chamundeshwari, Durga – the one we all pray by many names was thus created.  A goddess who had a lion as her vehicle, had multiple arms to carry all the weapons and yet very beautiful. To better visualize and feel the reverence we suggest you study the “Mahalakshamshtaka Stotra”, for example

It is said that Mahisha changed many forms in the violent fight but in vain and as per his own choice met end of his life at the hands of a woman who was more powerful than animals, men and even gods. The legend is that Mahalakshmi trapped Mahisha under her feet and killed him with the trident to be hailed as “Mahishaasuramardini” – The woman who killed Mahisha.

This legend is depicted in many sculptures within India and stone reliefs that adorn museums in many countries. The creative liberties taken by artists highlight different aspects like beauty of the goddess or the gruesome end of Mahisha.

In the panels that adorn the outer walls of this temple, a depiction of Mahishasuramardini can be found and it stuns, scares and creates a sense of devotion all at once. Artist has created the goddess and asura in almost equal size. Mahisha is depicted in a human body and a buffalo head. The sight of goddess with her multiple arms each bearing a different weapon stuns, while the sight of her one leg crushing the chest of the asura while twisting the buffalo head as the trident seems ready to pierce through scares. When you see it altogether a sense of devotion prevails thanking the goddess for saving us all from the clutches of a demon.

Ellora, as introduced before in our previous articles is a World Heritage Site well known for its caves. Cave 14 called Ravana-ka-khai and cave 16 called Kailasa has depictions of Mahishaasuramardini. While cave 14 depicts Mahisha as a buffalo, cave 16 depicts him in a human form with horns.

In the cave 14 depiction is a majestic proclamation of the death of Mahisha who is shown in the form of a buffalo. The goddess has four arms and with one has pierced the buffalo using her trident while another hand has a tight grasp over the nostrils.

In cave 16 the depiction is of an ongoing fight between Mahalakshmi and Mahisha. One arm folded and other outstretched indicates that the goddess may be attacking with a bow while Mahisha is attacking with his mace. The leaping lion adds to the ensemble action.

Hoysaleshwara temple built in 12th century during the rule of King Vishnuvardhana of Hoysala Empire is one of the most articulate and largest temples dedicated to god Shiva in South India.

The Hoysala sculptures are all about beauty and a detailed articulation of beauty and the Mahishaasuramardini at the Hoysaleshwara temple is no different. One has to soak and saturate in the beauty of the goddess and her ornaments before noticing a dead buffalo at her feet and even that with the detailing of the skin, tongue and expression leaves you with admiration for the artist.

Chennakesava temple at Somanathapura a town 35km from Mysore is another example Hoysala architecture. Unlike the one at Halebidu this has a more gruesome depiction of the dying asura. A buffalo is at the feet of the goddess and Mahisha has emerged out in his human form.  The insides of the asura are depicted as falling out of a ripped open body. Similar to the one at Halebidu the detailing of the skin of the buffalo is to be appreciated.

Coincidentally it is believed that Mysore is an Anglicized version of Mahisuru, the capital of Mahisha and it is here that Chamundeshwari fought and killed him. A temple of Goddess Chamundeshwari is situated atop the Chamundi hill here. There are theories too on how the hill is nothing but Mahisha fallen dead on the ground because when seen from a distance the hill looks similar to a man lying down on his back.

Mahabalipuram or Mammallapuram  is another venue that we have previously introduced our readers to. Located on a hillock are the rock-cut caves or mandapas. There are 11 of these mandapas and a prominent one amongst them is the Mahishasuramardini Mandapa.

The depiction of the legend here is similar to the one in cave 16 of Ellora, a storyboard of an ongoing fight(s) albeit in a much better condition.

Mahalakshmi is attacking with a bow riding a leaping lion while Mahisha, who seems too slow and dumbstruck to react is shown holding a mace. Another noticeable fight within the same panel is of the goddess chopping the head off a demon, thereby providing visualization to the legend that says in their fight Mahisha and goddess fought each other in different forms.

A feudatory of Vijayanagar Empire, Singedepa Devabhupala constructed the Gaurishwara temple at Yelandur in the Chamarajanagara district of Karnataka in the 16th century.  A wall relief sculpture of Mahishasuramardini is found here.

This sculpture is unique for depicting the Goddess killing demons with her many arms. Mahisha is at her feet and the trident has pierced through both his forms of human and buffalo. Another hand is killing a demon with a sword. The lion is shown attacking one demon while another one behind has been either pierced by an arrow or a spear.

Unlike all other sculptures discussed above the Goddess here is shown with a set of fierce teeth extending out of her mouth and the artist has managed to do this without making her look scary. Mahalakshmi comes through as someone who is going about her job without any emotion, while the demons all look in pain and scared to death. At best the expression she is carrying seems to convey – “Seriously Mahisha, why are you even trying?”

A discerning reader may realize there is a pattern in the mythological stories that we have covered so far – Lingodbhava, Markandeya and and now Mahishasuramardini. A pattern of how the choices made by individuals have defined them. In Lingodbhava, Brahma chose to lie – ended up as the only god who would not be prayed to. In the story of Markandeya, his parents chose to have a wise child with short lifespan rather than a foolish one with long life. That choice alone immortalized Markandeya. In our current story Mahisha made a choice about the means of his death and used it to devious extents till it brought his own end.

Isn’t it amazing that the Trinity, were non-judgmental, were appeased by penance of men or demons alike and gave them boons! It re-affirms, you will get your reward for hard work irrespective of whom you are. What you do with it is still your choice!

In today’s world too like in the past it is one thing to say it’s my choice and another to stay righteous.