Tragedy At The Hajj: Disaster Over The Years 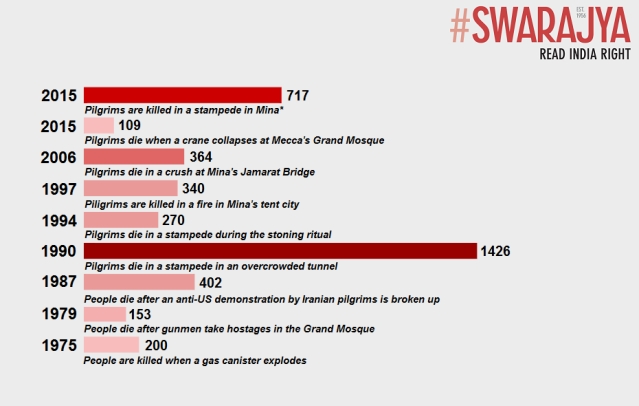 The annual Hajj has seen many tragedies over the years. Here are the numbers which make a far better planned and better managed Hajj necessary in the future.

The death-toll of the recent stampede in Hajj has increased to more than 700 fatalities. Sadly, this was not the first time a tragedy had struck the Hajj.

The year 1990 faced the most brutal stampede in Mecca, which resulted in the death of more than 1400 pilgrims. In 2006, a stampede during the stoning-the-devil ceremony led to a death 380 people.

Post the 2006 tragedy, several measures have been taken by the authorities at the Mecca to ensure the safety of all pilgrims. Some measures that were taken included: the Saudi Arabian government constructing three pillars and completing a five-story bridge where pilgrims can toss stones from, provision of on-site medical care, unidirectional flow of the pilgrims, etc.

However, many reports state that the reason for the September 2015 disaster was the increase in chaos and confusion at the site. Many new pilgrims, according to reports, inadvertently do not follow established guidelines. This resulted in the disruption of the crowd, and the increase in fatalities.