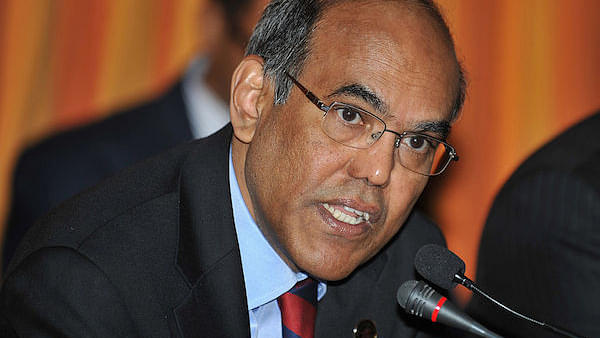 The feeling that has stayed with me after reading Duvvuri Subbarao’s Who Moved My Interest Rate? is that Raghuram Rajan, in the days to come, can write a similar book.

Subbarao was the Governor of the Reserve Bank of India (RBI) between September 2008 and September 2013. He was replaced by Rajan. (By the time this appears, Rajan would have been replaced by someone else).

Typically, many individuals who have worked with the Indian government at a senior level, tend to write their memoirs. Most of these memoirs are politically correct and, given that, very boring to read. They are also extremely self-centred, if I may say so. “I did this, I did that,” and so the story goes.

Subbarao’s book, though not a memoir in the strictest sense of the term, given that he only talks about his years as the RBI Governor, and not the time he spent in the Indian Administrative Service (IAS), is a welcome change from the usual tomes that get written.

There are multiple reasons for this. Subbarao has tried to write the book in a simple and lucid way. This is something that one does not expect from an RBI Governor. In doing so, he has ensured that anyone who picks up the book will get to understand the inner workings of the central bank.

This was necessary, since to most Indians, the RBI is essentially a black box— people don’t understand what it really does.

What I really loved about the writing style is that Subbarao makes no assumptions. Whenever he introduces a new technical term, he explains it in simple everyday English. This includes oft-heard terms, in the Indian central banking context, like repo rate and marginal standing facility.

The second reason why Subbarao’s book works is that it is largely honest and politically incorrect. In the book, he makes it clear time and again that there was great pressure on him to cut interest rates (more specifically the repo rate) all the time from the two Finance Ministers he worked with— P. Chidambaram and Pranab Mukherjee.

As Subbarao writes: “I have been asked several times if there was pressure from the government on setting interest rates. There certainly was, although the precise psychological mechanics of pressure would vary depending on the context, setting and the personalities…For much of the time during my tenure, although not always, there were differences of view on the anti-inflation stance of the Reserve Bank. Both Chidambaram and Pranab Mukherjee were piqued by the Reserve Bank’s tight interest rate policy on the ground that high interest rates were inhibiting investment and hurting growth.”

Other than the Finance ministers, even bureaucrats exerted pressure on the Subbarao-led RBI to cut interest rates. Subbarao writes: “What used to irritate me, though, was…one of the senior officers suggesting that the Reserve Bank must project a higher growth rate and a lower inflation rate in order to share responsibility with the government for ‘shoring up sentiment’. Finance Secretary Arvind Mayaram went to the extent of saying in one meeting that ‘whereas everywhere else in the world, governments and central banks are cooperating, here in India the Reserve Bank is being recalcitrant’.”

Now replace Subbarao with Rajan, and Chidambaram and Mukherjee with Arun Jaitley, the current Finance Minister, and the situation sppears to be exactly the same. The fact that Subbarao has chosen to talk about the pressure that the government exerts on the RBI in various ways, is what really makes the book work. The fact that the RBI still does not kowtow to government pressure all the time, is a great achievement indeed.

This also brings to the fore the fact that the governments don’t mind some amount of inflation in order to get growth going. This is precisely what happened in 2008-2009, in the aftermath of the current financial crisis, starting with the investment bank Lehman Brothers going bust. The then Finance Minister Pranab Mukherjee decided to increase government expenditure massively in order to ensure that economic growth did not collapse in the aftermath of the crisis.

For the next two years, the government ran up a huge fiscal deficit. Fiscal deficit is the difference between what a government earns and what it spends. This increase in expenditure translated into economic growth. India continued to grow at a fast rate, when the world wasn’t. But the inflation eventually caught up, and the economic growth fell below five percent between 2012 and 2014.

Subbarao asserts throughout the book that low inflation is necessary for economic growth. This is a point that Rajan has also been making since taking over from Subbarao in 2013.

The third reason why Subbarao’s book works is the humour that keeps cropping up throughout. One joke that I particularly enjoyed was about Pratip Chaudhuri, a former Chairman of the State Bank of India and K.C. Chakrabarty, a former Deputy Governor of the RBI.

Furthermore, Subbarao is honest about his mistakes. He offers multiple examples of how he screwed up (for the lack of a better term) on the communication front. And this has perhaps led to the realisation that “there was no question of the Governor ever speaking ‘in an academic context’.” This is something that has gotten Rajan into trouble over and over again. And the belief, at least among BJP politicians, is that he has gone beyond his brief.

Subbarao also talks in great detail about the data problems that the RBI faced while taking decisions. On this, he quotes his predecessor Y.V. Reddy, who is fond of saying, “Everywhere around the world, the future is uncertain; in India, even the past is uncertain.”

This statement comes from the fact that Indian economic data tends to get revised regularly, but by the time the revision is done, the decisions based on the data have already been made.

Subbarao recounts one such experience: “Another instance of data wrong-footing us was the indication of a significant drop in inflation which prompted me to cut the repo rate by 50 basis points in April 2012. But that inflation number was retrospectively revised upwards; it turned out that inflation had not declined as sharply as we were given to understand in real time.” Repo rate is the interest rate at which RBI lends to banks overnight and is a sort of an indicator of which way the interest rates are headed. One basis point is one hundredth of a percentage.

One grudge that RBI watchers have had with Subbarao’s book is that he does not discuss the sort of confrontational relationship he had with Deputy Governor Chakrabarty. But for everything else that the book reveals, this really cannot be held against Subbarao. All in all, it’s a fantastic book that showcases all that it takes to run the RBI despite pressure from the government.