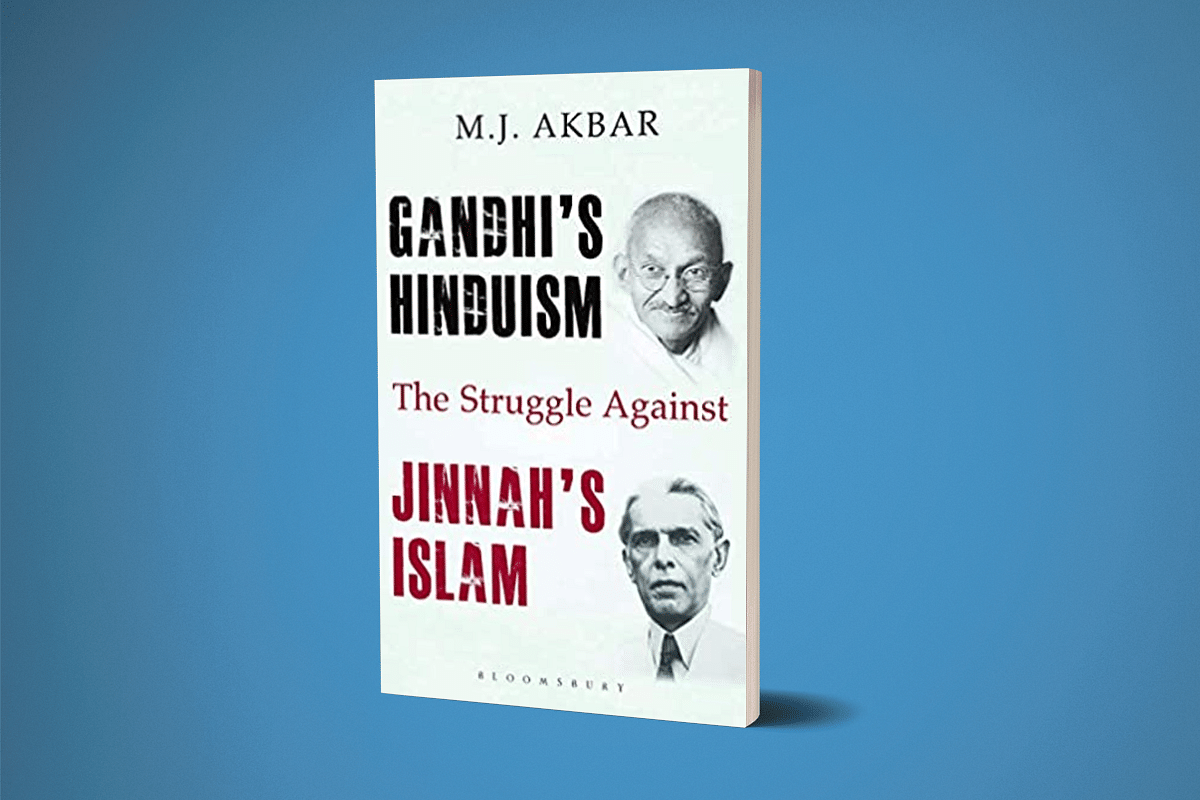 The book cover of Gandhi’s Hinduism: The Struggle Against Jinnah’s Islam

“The Muslim population is a population of converts — only a microscopic minority are not. They are all descendants of Indian-born people.”

This was not Savarkar defining Hindu-Rashtra or Guru Golwalkar on minorities. This was Mahatma Gandhi’s argument against the two-nation theory before the Cabinet Mission.

What Muhammad Ali Jinnah said in response is what we have been teaching our children in school all these years post-Independence — “India…had never been united since the days of Chandragupta Maurya, while contemporary India was only ‘one-third united’. British rule merely held together a disparate entity.”

These snippets and other passages from M J Akbar’s latest book Gandhi’s Hinduism: The Struggle against Jinnah’s Islam throw light on the fight between two world views that remain relevant today.

It was not just once that Gandhi highlighted the Hindu ancestry of minorities. He told the American journalist Louis Fischer — “every Muslim is merely a Hindu who has accepted Islam. Every Muslim will have a Hindu name if he goes back far enough…”

For Gandhi, a Hindu was someone who could “proclaim the same faith in the greatness of Islam, Christianity, Zorashtrianism and Judaism without in any way impairing the greatness of Hinduism.” This inclusive faith was an inheritance from his mother and the Pranami sect of Hinduism she belonged to.

As Akbar points out “Lord Rama became Gandhi’s ideal hero, although it was the Gita… which became the more influential text… His personal behaviour drew from the values enunciated in the Upanishads.” Justifications for his political moves often came from these spiritual moorings.

Fasting (both physical and mental) was a political tool but also an idea that drew sustenance from the Gita (2:59).

According to Akbar, Gandhi’s Ramarajya had parallels with Shri Aurobindo’s Dharmarajya. His yearning for reform in Hinduism echoed Swami Vivekananda’s ‘concept of Daridranarayan or Lord of the Poor’. His enchantment with the biblical injunction to turn the other cheek when there is violence sprang from his understanding of renunciation in the Gita.

What Akbar’s book shows is how Gandhi applied this moral philosophy to the challenging situations arising out of Jinnah’s amoral demand for Pakistan and British self-interests.

As highlighted by Akbar, the British first assured Jinnah a veto on the future structure of India during their weakest moment in the World War. This was because “Jinnah was the only Indian politician of any weight, ready and able, to support Britain”. Gandhi, representing the Congress, made full independence a pre-condition for any support to the British war effort.

This was no threat for Churchill who believed that the Congress did not represent India’s martial races but only a “Hindoo priesthood machine”. The British seemed to have believed Jinnah when he said Muslims that “had five hundred times more guts” and “sixty five percent of the Indian army would desert” if Muslims rebelled.

A more serious fallout of Gandhi’s stand was the impression that he and Congress were helping the Japanese invade India, even if unintentionally.

Many Congress leaders led by C Rajagopalachari or Rajaji wanted Gandhi to give up his determination.

Nehru, according to Akbar, “talked of a guerrilla war and scorched earth policy against the Japanese advance”. Chiang Kai Shek flew down to persuade Gandhi to join the Allied cause on the plank that the “British were benign in comparison to the vicious Japanese”.

For Gandhi, as long as India remained conquered it could not fight any war. The War and its consequences did not interest him.

For this, he drew inspiration from the Mahabharata — “the warring nations are destroying themselves with such fury and ferocity that the end will be mutual exhaustion. The victor will share same fate that awaited the surviving Pandavas. The mighty warrior Arjuna was looted in broad daylight by a petty robber.”

In fact, he advised both the British and the Chinese to let themselves be conquered; an advice he would repeat to his own people when they were slaughtering each other during Partition- “if all the Punjabis were to die to the last man without killing, the Punjab would become immortal”.

When he gave similar advice to the suffering Hindus of Noakhali, he quoted from the Ramayana to say what King Janaka was supposed to have done when his capital was burning- leave it to god. It was this disregard for practical consequences that became, what Akbar calls, “Jinnah’s trump card” in his fight for Pakistan.

According to Maulana Abul Kalam Azad (as quoted by Akbar), Gandhi admired Bose’s courage so much that his entire approach to the war situation may have been ‘unconsciously coloured’ by it.

Amongst Gandhi’s main weaknesses was his preference for Nehru. Akbar’s book has an entire chapter on Nehru’s ‘historic blunder’ in unilaterally scuttling the Cabinet Mission Plan — the last attempted roadmap for a united India.

It also contains interesting examples of Nehru’s conduct that don’t even appear well-intentioned, such as his appointment of Girija Shankar Bajpai as independent India’s first head of foreign service.

Bajpai was a British agent in America and the main collaborator with British authorities in misrepresenting facts about the Indian situation, including the circumstances of Kasturba Gandhi’s death and seriousness of the Bengal famine, to a sympathetic Franklin D Roosevelt administration.

Gandhi believed he could speak to Jinnah and the Muslims of India directly if only the British were to leave Indians to themselves.

The first difficulty was that Jinnah had no moral conviction in Pakistan. He was, according to Mountbatten, a “psychopathic case” who believed that “all Hindus are sub-human creatures.” So Gandhi’s moral arguments had no effect on him.

It was in his dealing with the larger Muslim population that Gandhi’s principles were put to their toughest test. Akbar says he was “not oblivious to a central dilemma in his doctrine. While raising religion to the top of the… political agenda… he had confronted the initially gradual and then steep ascent of Islamists.”

Wherever Gandhi personally intervened he made a difference, as in the case of Syed Suhrawardy. The mastermind of Calcutta’s Direct Action Day later wept in repentance to him and remained by his side during his most salutary and even dangerous stay in the riot-torn city. But there was only so much one man and his faith could do.

The dilemma in Gandhi’s philosophy is more relevant today than it was during his time.

His view of Islam, as quoted by Akbar from Rafiq Zakaria was —

the Quran specifically mentions that there is no land where God has not sent his messengers with the book of truth; in that case how could such a vast subcontinent be deprived of His revelations? That is why some Ulema accepted the Vedas as divinely inspired and Rama and Krishna as Prophets. One of the greatest religious leaders of the Middle Ages, Mazhar Jan-i-Janan had even declared that Hindus could be considered as ashul kitab or ‘People of the Book’ as they had the Vedas. The poet-philosopher of modern Islam, Allama Iqbal was so moved by the Gayatri Mantra that he translated it in Urdu verse and in the introduction, he affirmed that Hindus could not be considered as Kafirs as they believed in Supremacy of God.

It was on the basis of this understanding of Muslims, as associates of larger Indian culture, that Gandhi thought he could defeat Jinnah.

Akbar’s book is not meant to be an exposition on Gandhi’s spiritualism or his views on religion. He refers to them only to show how they panned out in the fight against Jinnah’s ‘Islam’. This ‘Islam’ had no spiritual content.

The battle for partition was won by Jinnah with lies, hatred, British support and very importantly also because of the limited franchise exercised by the electorate at the time.

According to Akbar, “Jinnah proved that if Gandhi could integrate religious morality into a vision of future harmony, he could fuse religious rhetoric with fear to mince centuries of coexistence and create a Muslim Pakistan”.

Akbar’s book does not pretend to have contemporary relevance. It ends with a poignant comparison between the last days of both leaders, perhaps as an indication of where the war between their ideologies was heading.

Jinnah’s roar may have died in a whimper. The monster of fanaticism that was his vehicle continues to thrive in Pakistan, India and many other parts of the world. Akbar’s book, and the lessons it leads to, shows us a forgotten path to fight it.