Can BJP Speak Bangla In Tamil? 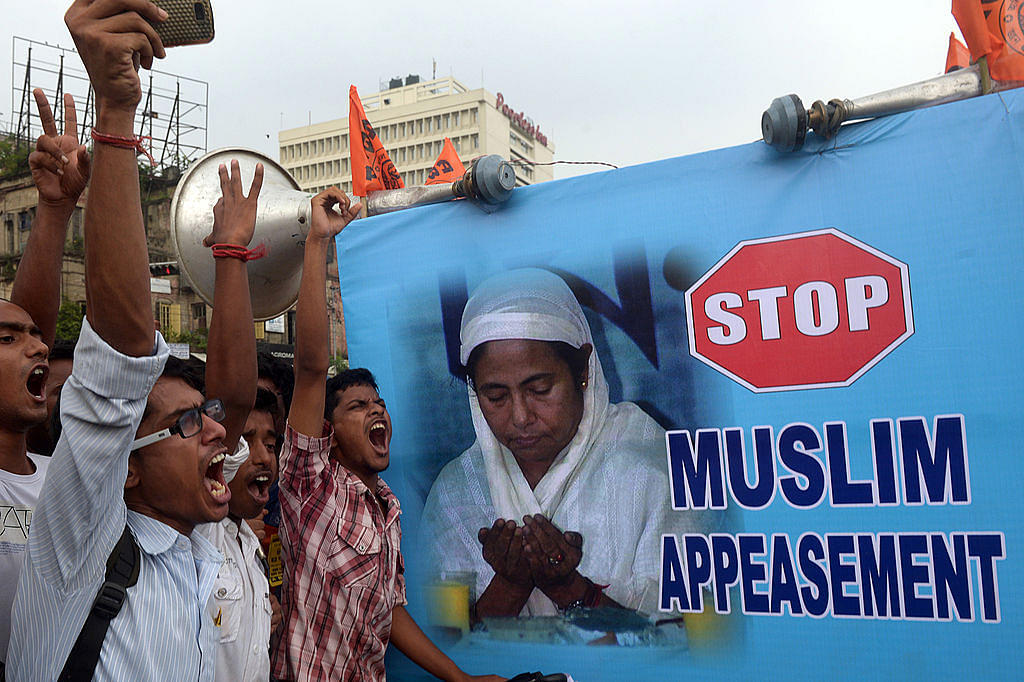 Bengali youth protesting against some of Mamata Banerjee’s policies.

Bengal is, geographically speaking, far removed from Tamil Nadu. But there are some stark similarities between the two states, and the people of the two states. And this is what the BJP, which has already made massive inroads in Bengal, can leverage to its advantage in Tamil Nadu.

The similarities between Bengalis and Tamils transcend the genetic links between them. Not all the similarities, though, are laudable, and quite a few of them are responsible for the sad state of affairs in both the states. What is significant is that the BJP, which finds itself in the same position in the Southern state today as it was in the Eastern state five years ago, has been quite successful in changing the mindset of the Bengalis and making them come out of the defeatist mould that was holding back Bengal’s progress all these decades. This, though, is still a work in progress.

But first, the laudable similarities and links between Bengalis and Tamils. It is an undeniable fact that both the Be — ngal and Madras Presidencies — under the British rule — were counted as the most prosperous and progressive. The Tamils and the Bengalis took advantage of Western education introduced by the British and made great strides. Both the states cradled literary, cultural and scientific progress. Tamils and Bengalis became renowned for their cultural, educational, literary and professional achievements.

What is also notable is that while achieving all this progress in various fields, Bengalis and Tamils remained rooted in dharmic traditions. In fact, both the provinces witnessed religious revival movements led by great religious figures, in their own time. And both the Tamils and Bengalis had their own revered deities: Murugan in the case of Tamils and Durga in the case of Bengalis.

Swami Vivekananda is as much revered in Tamil Nadu as he is in Bengal: his Tamil disciples raised a lot of money to enable his travel to Chicago in 1893, and the first rousing public reception he received on his return from America was in Madras (Chennai).

One of the most enduring and close links between Tamils and Bengalis is Netaji Subhas Chandra Bose. Bose is a hero who is admired even today and many, especially in southern Tamil Nadu, have ‘Bose’, ‘Chandra’ and ‘Subhas’ as their names while portraits of the INA chief adorn the walls of many homes in Tamil Nadu, as they do in Bengal.

Tamil literary icon, Subramania Bharati is widely respected in Bengal and just as he translated many of the works of Tagore (who he greatly admired) into Tamil, Bharati’s works have also been widely translated into Bengali. Bharati’s literary works are still well-received at the annual Kolkata Book Fair.

Tamils and Bengalis are justifiably proud of their cultural and literary heritage and have their revered icons — scientists, doctors, engineers, lawyers and other renowned personas — who won national and global acclaim for their accomplishments. The two communities also have a glorious history and both the provinces are dotted with ancient temples. Bengal’s history, though, has been clouded by Muslim invasions and subjugation by Islamist warlords since medieval times. Bengal and Tamil Nadu also boast of their unique cuisines.

Another factor common to both the communities is the stellar role played by many Bengalis and Tamils in India’s freedom struggle. And the leadership roles that men and women from both the communities played in the freedom movement and immediately after India’s Independence was exemplary.

However, both Bengal and Tamil Nadu developed agnostic tendencies before Independence and these tendencies even developed into marked anti-Hindu movements cloaked in the garb of rationalism, anti-Brahminism and reformism. Thus, while Periyar E V Ramasamy led the so-called ‘self-respect movement’ in Tamil Nadu, many Bengali ‘reformists’, encouraged by Christian missionaries and the British rulers, started denigrating Hinduism.

And soon after Independence, Bengal got afflicted by the scourge of communism. That eventually led to the all-round decline of Bengal.

The alienation of both the Tamils and Bengalis from their dharmic roots, their de-racination so to say, in the name of pseudo-secularism and fake agnostic ‘progressiveness’ led to the decline of the polity in both the states. Bengal witnessed a steady industrial and economic decline from the mid-1960s due to the spread of communism. The Naxal movement resulted in the flight of capital from the state and its subsequent intellectual, cultural, academic and moral decline. The rot that had set in sometime in the mid-1960s worsened with the communists coming to power in the state in 1977.

Over the next 34 years, Bengal sank deeper and deeper into a morass of poverty, mediocrity, hopelessness and lawlessness. The Trinamool rode to power in 2011 on a tsunami of hope for change and a break from the past, but hope was all that it was. In the past eight years industrial decline has continued unabated, the state’s debt burden has doubled since 2011, political violence has peaked as have crimes, extortion and corruption, and a breakdown of law and order has been accompanied by greater cultural, intellectual and academic degeneration.

The anti-industrial and anti-capital sentiments that have taken root amongst Tamils in recent years had perilously afflicted Bengalis many decades ago. The same axis of neo-Luddite, communist, evangelical and Islamist forces who are fanning protests against development projects in Tamil Nadu today have been doing so successfully in Bengal for nearly six decades now.

Another sinister tactic — sub-nationalism — deployed by these four forces (neo-Luddite, communists, evangelists and Islamists) is common to both Tamil Nadu and Bengal. This axis has been using Bengali sub-nationalism — fuelled by a sense of false pride amongst Bengalis of their glorious past, a sense of victim-hood (the alleged ‘step-motherly’ treatment by the Union government) and a feeling of superiority over ‘North Indians’ in general — to keep Bengalis in a state of continuous agitation in order to divert their attention from the sorry mess that Bengal has been for many decades now.

The same holds true for Tamil Nadu. Tamil sub-nationalism has been used very effectively as a political tool to keep pan-Indian parties away from the state’s political landscape all these decades. And that has accorded a free play to regional parties (DMK, AIADMK etc.) as well as sub-national forces.

In Bengal, too, the communists and now the Trinamool has fanned Bengali sub-nationalism to maintain their stranglehold on power in the state and keep national players — like the Congress and the BJP — out of the political reckoning in the state.

Another unfortunate similarity between the two states is that the nexus of the four forces has used theatre, literature, cinema and the arts to spread falsehoods about, and trigger apathy and antipathy amongst Hindus towards their religion and religious practices. Bengali and Tamil literature, plays and cinema have continuously denigrated Hinduism, its practices and legends associated with the Dharma.

In West Bengal, playwrights, poets, writers and litterateurs have been part of the project to separate the Bengali Hindu from Hindus in the rest of India. This has been done by making Bengali Hindus feel they are different — ‘Devi Durga is ours, not Bhagwan Ram’ — from Hindus belonging to other communities and regions. The myth that Bengali Hindus’ Pujas are more cultural than religious festivals — the propagation of Durga Puja as ‘Sharod Utsav’ (autumn festival) — has been part of the project to deracinate the Bengali Hindu.

The only difference in the sinister game-plan of the axis (of four forces) in the two states is that in Bengal, the ultimate aim is to irreversibly change the demography of Bengal and make it a Muslim-majority state. The communists, and now the Trinamool, have encouraged massive influx of Muslims from Bangladesh into Bengal for political gains. And they had been successful in immunising the average Bengali Hindu to the dangers posed by this demographic change through heavy doses of pseudo-secularism, fake progressiveness, communism and hollow liberalism.

Erasing the ‘Calcutta Killings’ of 1946 and the pogroms against Hindus in East Bengal, East Pakistan and now Bangladesh from the collective memories of Bengali Hindus has been an integral part of the project of the four powers.

But, as is often said, it is impossible to fool all the people all the time. The Bengali Hindu in the rural and semi-urban areas — who had become tired of the Left rule and ousted the communists from power in 2011 — has now once again realised that the Trinamool is a more virulent form of the Left. They have been the hapless victims of extortion, high-handedness and corruption indulged in rampantly by Trinamool functionaries. They have felt the negative impact of Mamata Banerjee’s minority-appeasement policies that have made Islamists more aggressive, especially in the districts of Bengal bordering Bangladesh.

The BJP, which had barely a marginal presence in Bengal five years ago, started by consolidating the Bengali Hindus and tapping into their latent anger towards the corruption, high-handedness and minority-appeasement of the Trinamool. At the same time, a Dharmic project was launched to make the Bengali Hindus realise that they were an integral part of the Hindu community.

The anger and disgust towards the Trinamool, combined with a renewed sense of religious identity and revival of the bond with Hindus in the rest of the country (as was evident from the massive and fervent participation in Ram Navami and Hanuman Jayanti celebrations across Bengal) resulted in the BJP bagging 18 of the 42 Lok Sabha seats in Bengal in this year’s general election.

Except for Muslim-majority constituencies, almost all of North and Central Bengal have turned saffron. It is only South Bengal where the BJP is yet to break into. But here too, the BJP bagged a good vote share and was the runner-up in almost all the seats that the Trinamool won. And by all available indications till now, it is only a matter of time before the saffron party breaks into this Trinamool citadel.

The BJP’s success in Bengal can, thus, be replicated, albeit with some tweaking, in Tamil Nadu. The defeat and total decimation of the ‘axis of four powers’ is the only way in which both the states can reclaim their lost glory.