Despite The Recent Setbacks, The Force Of Globalisation Is An Irreversible Reality 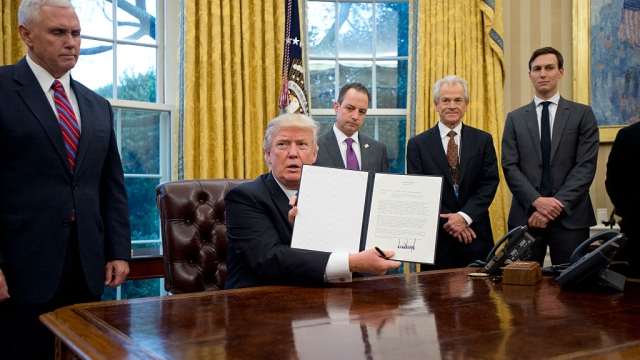 The ongoing globalisation of autarchy—a phenomenon that has afflicted nations in various forms since the global economic crisis hit the haves of our planet on 15 September 2008 but has got a rhetorical momentum with the flourishes of US President Donald Trump over the past two months—is not new. But for every economy that threatens to or does close its economic borders through tools in the hands of its sovereigns, there are counterbalancing forces that can realign themselves to benefit from those closures.

Let’s not get carried away by the rhetoric, though. Step back and see that the resurgence of nationalism and self-sufficiency through the erection of cultural and economic barriers and walls seducing one strong nation after another is only a political construct. Economists have captured this in one word—autarchy, which the Routledge Dictionary of Economics defines as “a completely closed economy which does not engage in international trade”. The swing, if that, will be high on oratory and short on actions. Today, the new global political narrative seems to say, “from autarchy began the march of globalisation, in autarchy it will end.” I argue that this return to autarchy is really a realignment of world affairs—globalisation is not, and cannot, end.

Of course, nobody, not even Trump, is actually shutting down borders. These are merely the first indications of muscle-flexing, message-mongering to those who elected him. It is equally a signal to other large powers like China as an emerging superpower, West Asia as a region and emerging powers like India, that the role of US in international foreign policy will be limited and the new regime comes with an economic tit-for-tat.

The impermanence of this inward and aggressive rhetoric too is out there—the return of Trump to One China policy that insists on derecognising Taiwan as a nation, for instance.

In the continuum of Trump’s rhetoric, another phrase has resurfaced—America First—implying that absolute autarchy is not on the foreign policy table, though its nuances may change. It could mean several things. One, the nomenclature states the primacy of the US, not its exclusion. Two, focus on American jobs through taxation policy that would embed US jobs into US capital. Three, primacy of American capital (over consumers and citizens) through loosening of financial regulations, allowing or even facilitating another economic crisis like the one in 2008. Four, a rebalancing of trade surpluses, which in turn means a change in trade relations, particularly with China—but not their end. Five, and this would be tricky for its job-intensive large-capital defence industry, a step back from military meddling in world affairs, particularly in West Asia.

That said, the America First rhetoric is not new. Over time, several nations have adopted it in one way or another. In India, Prime Minister Narendra Modi’s campaign during the 2014 elections hovered around India First. “My definition of secularism is simple: ‘India First’. Whatever you do, wherever you work, India should be the top priority for all its citizens,” The Economic Times reported him as saying. “We might do any work or take any decision, India should be supreme. Nothing less than India’s wellbeing should be our goal.”

The nationalistic Country First slogan has travelled across the world. Marine Le Pen proposed “France First” when she launched her presidential bid: “The division is not between right and left anymore, but between patriots and pro-globalisation,” Voice of America quoted her in a speech. Effectively, she labelled the proponents of globalisation as traitors. In the southern hemisphere, hear the cries of Australia First: “Too many work visas are being used as a low-cost substitute for employing an Australian, not to address a genuine shortage,” news.com.au quoted Australian opposition leader Bill Shorten in his 31 January speech. “We cannot allow our country to become an unskilled enclave in a modernising Asia.”

The ‘Nation First’ rhetoric raises several questions. One, if this rhetoric is emerging now, does it mean all other leaders before today did not focus on their countries? In India, despite all misgovernance and corruption, did the UPA government put some other country First? Two, if every country is First, which is second? In the context of India, should it put China second (as its largest trading partner), the US (because the oldest democracy resonates with the largest), West Asia (where its labour goes to work), the neighbourhood (important for peace)? Three, is globalisation to blame for job losses and economic woes of nations? If so, should India ignore the gains of pulling millions out of poverty since the 1990s or the creation and maturing of the information technology industry and put an end to all investment flows into the country? Of course, these questions are as rhetorical as the Nation First statements.

When we examine these emerging narratives in an age of acute, and now visible, income inequalities across nations, we see them as politically attractive kneejerk expressions of democracy being in conflict with globalisation and capitalism. The former is the voice of the mass that grants legitimacy to a nation, the latter individual expressions that convert ideas, hard work or simply inheritance into wealth. Caught between the two are the have-nots, who now have at their disposal the information and power to bring political change to counter economic disparities.

In themselves, the differences are stark, with inequality becoming a political issue across the world. In the US, the wealthiest 10 per cent control three-fourths of all family wealth, according to an August 2016 Congress Budget Office report. The world’s eight, repeat eight, richest billionaires control the same wealth as the poorest half of the world’s population, according to a January 2017 Oxfam report; last year, the number was 62 richest billionaires against the poorest half of the world. The same report stated that the top 1 per cent Indians, or about 12.5 million people control 58 per cent of the country’s wealth (the number is one-third for non-democratic China).

Standing as an accused in the court of the people of the earth, therefore, is a phenomenon called globalisation. The victims of inequality are voting it out and replacing it with nationalism that has cultural, racial as well as economic textures. The new superhero is autarchy. Its arms are curbs on free trade, quotas, prohibitions, barriers to outward capital flows in the form of taxation, barriers to business flows in the form of visa restrictions, barriers to cultural flows masked by the refugee crisis in Europe. This is not new: “Virtually every step in commercial policy has been in the direction of more exaggerated restrictions upon trade,” wrote economist Alvin Saunders Johnson as far back as May 1935 in his paper The Rationale of Autarchy. “Autarchy, or complete national self-sufficiency, has become a part of the creed of present day nationalism.”

Eight decades later, the world seems to be confronting the same problem. But coming at a time when citizens and consumers are extremely well-informed, autarchy has no place on the high table. Globalisation encourages efficient utilisation of resources—land, machines, men, money, resources and so on—and pulls out the best that money can buy to convert ideas into products. Autarchy demands the primacy of self-sufficiency over ideas and create everything within geographical confines that comprise a nation. Globalisation seeks the best from across the world for sovereigns. Autarchy demands the restriction of consumption to the citizenship of products being consumed. The politics of globalisation attempts to bring the best at the least cost to its citizens. The politics of autarchy seeks to turn its citizens into tools of nationalism—the citizen must be a nationalist first, consumer next; her tribute to the country must come before her needs.

Buy American, buy German, buy Indian, the propaganda accompanying a nationalistic autarchy comes packaged in the consumption basket. In other words, consumer martyrdom is embedded into autarchy. And beyond making noises on social media—itself the sublime pinnacle of globalisation, with Facebook, whose 1.86 billion monthly active users are more than the population of China—there would be few consumers who would accept the inconveniences of ending globalisation.

Take the iPhone. According to news reports, Apple may start manufacturing them in India. According to Macworld, its accelerometer is made in Germany, US, China, South Korea, Japan and Taiwan; its audio chips in UK, China, Japan; its battery in South Korea; its camera in Australia, Brazil, China, India, Indonesia, Japan and more than a dozen locations in Europe and Latin America. All told, the iPhone is the creation in dozens of countries, and being consumed in almost every country on this planet. To say, therefore, that US citizens will no longer use iPhones because China’s trade balance is adverse and it is behaving like a bully in the South China Sea that harbours US interests is silly, impossible to execute and, frankly, irrelevant to the emerging big picture of an eastward shift of economic power in the hands of the world’s second- and seventh-largest economies, China and India, in a region that is individually and collectively the world’s fastest-growing.

Looking beyond products into inter-country engagements, one by one, institutions that provide the grease of sovereign transactions are falling by the wayside. The legitimacy of the United Nations is under threat, with China abusing its veto to protect the world’s two greatest rogue nations—North Korea (effectively an autarchy and failed state) to its east and Pakistan (a fast-failing terrorist state) to its west. It has failed miserably in West Asia. The reform in multilateral institutions of World Bank and International Monetary Fund is failing—the head of the former will always be an American choice, the latter a French. New institutions are coming up, the G20 for instance, which after its initial enthusiasm is failing to function as the board of directors of the global economy.

The idea of an economic darkness in the form of autarchy, with each nation proposing to put food from its own plate into its own mouth, is politically attractive no doubt. All such ideas that articulate an “other”, an “outsider” as enemy will work to soothe emotions. The power of democracy is getting stronger but narrower, its articulation increasingly the expression of economic rage, its final destination to eat the rich internally and beggar their neighbours in foreign affairs. But these ideas can only give a short-term political hope till the next elections, not provide solutions that sustain the long-term wellbeing of nations.

There is no doubt that the world needs a new and stronger discourse. The days of superpower-nations are coming to a close and will be replaced by smaller groupings or inter-country bilaterals. Managing these relationships might have been difficult in yesterday’s world. But technological hyperjumps and the emerging digital pipelines now allow nations to manoeuvre such complex relationships with ease. Looking beyond Western rhetoric, it is clear that the ship of globalisation is putting its anchor in the East from the West. This force will continue to generate benefits for countries that harness its potential. And it is countries like India and China that will nurture it going forward.

The threat of autarchy is merely political rhetoric, the force of globalisation an irreversible reality.