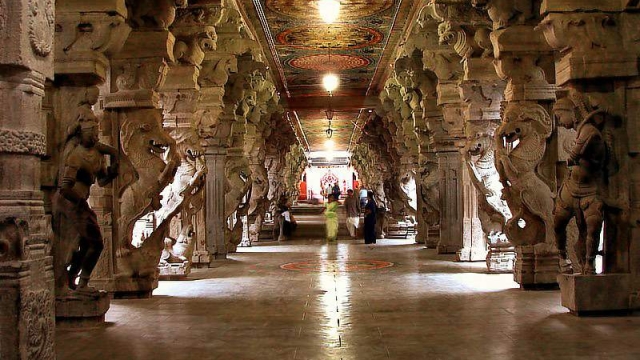 The corridors of Meenakshi Amman Temple

Recognising the complexities associated with temple affairs, the Union government constituted a commission of inquiry in 1960 under the chairmanship of Dr C P Ramaswami Aiyar to recommend practices for the effective management of temples and proper utilisation of their resources. This commission solicited inputs from the general public and received numerous memoranda. It scrutinised copious views and synthesised diverse suggestions regarding the administration of temples.

The commission was critical how the governments and courts had handled affairs of temples and mutts. Members pertinently observed:

“…it is essential for the revival and regeneration of the Hindu…faith and tolerance, to resuscitate and, by all practical and legislative means, to re-establish the root idea underlying the institution of temples and of mutts.”

The commission submitted an exhaustive report in 1962 consisting of over 110 recommendations. The report neither aggregated temples homogeneously nor treated them identically. Yet, it recommended a uniform pattern of legislation dealing with the administration and management of all classes of religious endowments in India.

The commission recommended an overarching central act that regulates not only the training, licensing, appointment, emoluments, conduct and welfare of temple priests, pujaris, archakas, pandaas, etc, but also provides for oversight in the appointment of elected/selected trustees, responsible for day-to-day management of temples. Also envisioned were provisions for effective vigilance apparatus and state intervention, whenever objects of any endowment are not duly carried out or are frustrated.

Maintenance of proper accounts and budgets, besides statutory audits were declared vital too. Indeed, no segregation of religious and non-religious (or secular) aspects of temple affairs can be made. All temple activities, barring regulatory compliance perhaps, are inextricably religion-linked. For instance, a software entity classifies its activities as “line vs staff/support” and not, “software and non-software”, right? It is vital to view temple operations also along similar lines.

The commission held that funds of temples should be utilised for both ‘obligatory’ and ‘optional/desirable’ purposes. Obligatory functions pertain to the core aspects of deity worship and temple upkeep and preservation. Optional objects relate to allied, adjunct matters of charity, social service and propagation of religion. Also recommended was the creation and use of a ‘common good fund’ for the renovation and rejuvenation of impoverished temples, besides the promotion of dharmic tenets and sampradayas through the setup of educational institutions, with curricula and courses of studies modelled after the theological universities of the West.

The commission was unequivocally critical of civil courts adjudicating matters concerning Hinduism. To combat endemic delays in the judicial apparatus, it envisaged the setup of statutory tribunals. In concert with regulatory and preventive mechanisms, the tribunals were to facilitate rapid action and reversion of unlawfully alienated and wrongfully appropriated temple assets. Advisory committees composed of accredited members and reputed representatives (laypersons and sadhus/sanyasis) with knowledge of Hinduism, its religious practices and sampradayas) for consultation by the tribunal was advocated. Making defendants liable for costs in legal proceedings was proposed for deterring frivolous litigation.

The commission favoured vesting the government with powers to remove temple trustees; make temporary appointments and take all other remedial measures when emergent situations arose warranting such urgent action. The validation by tribunal of all such orders and its appellate jurisdiction was endorsed too.

Finally, the constitution of an organised, regulated and disciplined body like the Bharat Sadhu Samaj for carrying out the task of religious and ethical instruction of the masses, especially the youth of the country, was urged. A case was made for the training of properly screened and selected persons as sadhu missionaries and priests.