Great Hypocrisy Of “Secular” Indian State: It Controls Only Temples; We Must Take Them Back 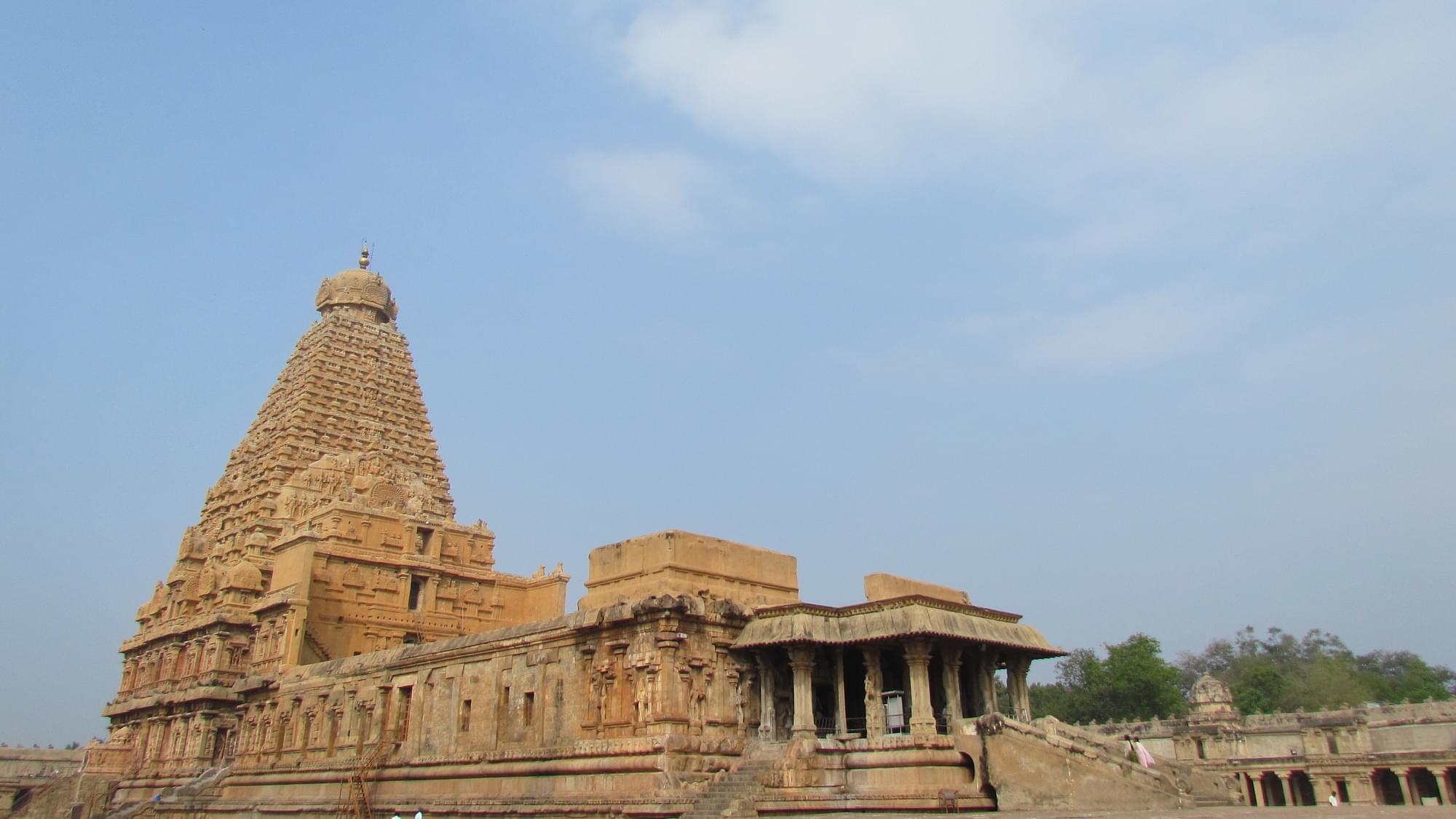 In April 2016, more than a 1,000-year-old temple, built by Rajendra Chola-I in Thanjavur district of Tamil Nadu, was pulled down by the state government in the name of renovation. The government said the temple was only ‘dismantled’ and would be put together again. In May 2010, the temple tower of the famous 500-year-old Kalahasti temple in Andhra Pradesh, built by King Krishnadevaraya of Vijayanagara, collapsed. A UNESCO report released in August 2017 raised alarm that the Tamil Nadu government, which manages more than 36,000 temples, neither had the capacity nor qualified experts to carry out conservation work, leading to the “massacre” of ancient temples. These magnificent temples would be national treasures in any other country, and protected with great care. Tamil Nadu’s temples are indeed known globally, but the sheer scale of the treasure is unappreciated (dozens or hundreds of temples are over 1,000 years old) and numerous gems languish in obscurity, crumbling away for lack of care.

This sorry state of affairs is the direct result of temples being managed by callous and corrupt state governments. Several Hindu Religious and Charitable Endowments (HRCE) acts have allowed states to assume financial and managerial control of more than a hundred thousand Hindu temples. These HRCE departments are headed either by a cabinet minister or by ostensibly autonomous boards. According to a Supreme Court judgement, governments are free to appoint Marxists and non-believers to manage these departments.

During deliberations that preceded the passage of the landmark “Madras HRCE Act of 1951”, the premier of Madras, O P Ramaswamy Reddiar, assured the House of his government’s intention: “In bringing forward this Bill sir, let me make it clear that I have the highest interest of our faith at heart… The regulation of Hindu temples and maths is regulation of the community’s life and conduct; the revival of our temples is the revival of our people… If we do not make our temples a positive force, radiating a healthy progressive, social and cultural outlook, we shall be playing into the hands of the surging Godless crowd…”

How ironic then that temples are managed by Marxists in Kerala, atheist Dravidian parties in Tamil Nadu, or Christians such as Y S Rajasekhara Reddy in Andhra Pradesh, who tried to build a church right on top of Tirumala. They have wreaked havoc on the financial sustainability of temples, although ostensibly practising Hindu politicians are also culpable. Virtually all of Reddiar’s stated intentions stand belied or worse. T S S Rajan, who introduced the bill in 1949, said, “Ours maybe called a secular government, and so it is. But it does not absolve us from protecting the funds of the institutions which are meant for the service of the people.”

This has been the pre-eminent rationale to justify government management of Hindu temples. In reality, state after state has used the precedent of Tamil Nadu to pass HRCE acts, seeing temple funds as cookie jars they can raid for all and sundry purposes. Mismanagement extends to all aspects of temple administration, and borders on the criminal.

Rich temples such as Tirupati, Guruvayoor, or Mumbai’s Siddhivinayak temple have routinely been raided to fund state budget programmes or line politicians’ pockets, while what happens in Tamil Nadu can only be described as wholesale loot. The HRCE Department controls more than 4.7 lakh acres of agricultural land, 2.6 crore square feet of buildings and 29 crore square feet of urban land. The government, however, collects a mere Rs 36 crore in rent, while any reasonable measure will run into thousands of crores.

Financial mismanagement is compounded by gross incompetence when it comes to temple maintenance. There are numerous instances where ancient murals and paintings were white-washed, mandapams were demolished and walls sand-blasted causing precious inscriptions to disappear. While the government eventually issues notifications acknowledging the errors of such senseless acts, the damage is already been done, and new forms of egregious violations occur at other temples. There are long running rackets in the smuggling of exquisite ancient sculptures abroad and while there have been some notable successes in recapturing artifacts recently, they remain the tip of the iceberg. Moreover, the initiative and intelligence for these successes come from private efforts, like the one initiated by the India Pride Project.

Such a loot has been the inevitable outcome since modern bureaucratic control of temples commenced during the British rule. The first Collector of Chengalpattu, Lionel Place, noted in his “report on the jagir” of 1799 that, soon after he became the Collector, he took over the “management of the funds of all the celebrated pagodas” into his own hands and allocated expenses for their festivals and maintenance. By 1801, these were converted to “fixed money allowances” under a “permanent settlement”.

An article on the Tirupati temple by the collector of North Arcot in the Asiatic Journal in 1831, is even more explicit: “It was a strange but determined piece of policy when throughout the country the pagoda lands were resumed by the company and tusdeck allowances were granted in their place… Now let us contemplate the result of this plan. From one end of the country to the other, the pagodas are ruined, unmaintained…The revenues of Tripetty are on a gradual decline and will die in the lapse of years a natural death. Some of the most celebrated temples in the country are worse off. But there are still, alas, many more strongholds of the devil.”

These acts of what can only be called ‘state-sanctioned violence’ acquire the colours of apartheid when compared with the rights of other religions in independent India. One of the great ironies of Indian secularism is that a vocally secular government sees no contradiction in managing Hindu temples – and only Hindu temples. The dramatically different legal, nay constitutional, position of the Hindus vis-a-vis other religions is best understood with reference to a few key provisions of the Indian Constitution, summarised below:

Article 14 — Equality Before Law. The State shall not deny to any person equality before the law or the equal protection of the laws within the territory of India.

Article 15 — Prohibition of discrimination on grounds of religion, race, caste, sex or place of birth

(1) Subject to public order, morality and health..., all persons are equally entitled to freedom of conscience and the right to freely profess, practise and propagate religion.

(2)(a) Nothing in this article shall... prevent the State from making any law regulating or restricting any economic, financial, political or other secular activity which may be associated with religious practice;

Article 26 — Freedom To Manage Religious Affairs. Subject to public order, morality and health, every religious denomination or any section thereof shall have the right.

(a) to establish and maintain institutions for religious and charitable purposes; (b) to manage its own affairs in matters of religion; (c) to own and acquire movable and immovable property; and

(d) to administer such property in accordance with law.

Article 29 — Protection Of Interests Of Minorities. (1) Any section of the citizens residing in the territory of India... having a distinct language, script or culture of its own shall have the right to conserve the same.

The Indian Constitution confers extraordinary protections on minorities. But crucially, the equality promised under Articles 14 and 15 and the freedom to manage religious affairs under Articles 25(1) and 26 are abrogated for Hindus, and Hindus alone, in the matter of their temples by recourse to Article 25(2)(a). By considering temple finances a secular matter, the tentacles of the state are now deeply entrenched into purely religious matters such as conduct of puja and other rituals.

Articles 29 and 30 together constitute yet another assault on the Hindu community and its unity. The right to manage institutions conferred by Article 30 ought to be a natural right for all communities. But Hindus alone have been denied this privilege. Article 29 virtually guarantees that Hindus will splinter into smaller groups that can claim minority status on the basis of language or culture, thereby securing immunity from the depredations of the state. Groups such as the Ramakrishna Mission, and now Lingayats, have claimed/are claiming minority status for this reason, as are many private educational institutions run by Hindus. As far back as 1927, the passage of the Hindu Religious Endowments Bill caused communities in Canara and Malabar to claim to be “separate and independent communities”. This harms the unity and integrity of India by encouraging more groups to separate as distinct entities, not because they have seen themselves as such historically but simply for constitutional convenience.

This also severely hampers the Hindu community’s ability to respond to the menace of religious conversions. Hindus are routinely accused of not performing adequate social service for the poor, unlike Christian missionaries. But how could they, when the government usurps temple funds and interferes in educational and other institutions? By contrast, churches are completely free from interference and run schools and hospitals on a for-profit basis that fund conversion efforts. A comparison of the legal rights of various religions in India today is shown in the table below. Such institutionalised discrimination against an ostensible 80 per cent majority community is without parallel anywhere in the world.

Hindus Have A Right To Manage Their Temples

The near total ignorance and indifference among the educated elite of India about how temples are managed is only now beginning to change, with the growth of a right of centre media ecosystem. But granting Hindus the right to manage their temples should not be a partisan issue. On the one hand, politicians of all hues have been guilty of misappropriating temple funds. On the other, intellectuals on the Left have opined just as much against state interference in temples.

Hinduism has a millennia-old history of local management of temple affairs. An inscription at the Tirupati temple from 1390 CE indicates the composition of the local management committee, while describing the share (nirvaham) of the prasadams to be given to the members:

This is a structure that can easily be adapted to modern needs. There are legitimate questions about how temples would be managed and how corruption can be avoided, but no one questions the right or ability of minorities to manage their places of worship.

Claiming that the government must manage temples makes the implicitly bigoted assumption that Hindus alone are incapable of managing their temples.

This article is part of Swarajya Heritage Program. If you liked this article and would like us to do more such ones consider being a sponsor - you can contribute as little as Rs 2,999. Read more here.