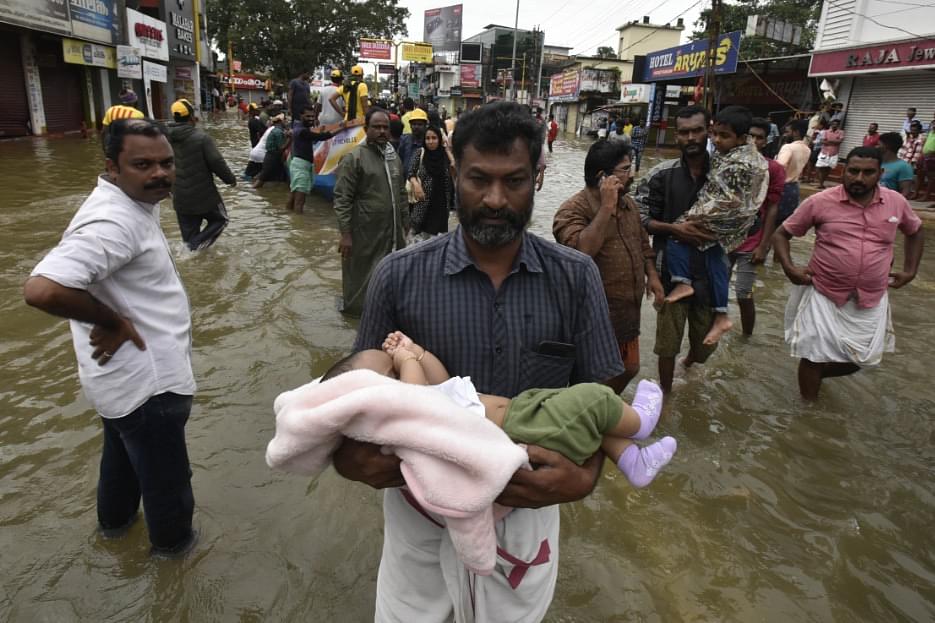 A man carrying a child through the flood water to a safe place at Panadala, on August 18, 2018 in district Pathanamthitta, Kerala. (Raj K Raj/Hindustan Times via Getty Images)

Torrential rains and resultant floods in July and August have wreaked havoc in Kerala. In Karnataka, Kodagu district was badly affected by floods in August. Nearly five lakh people were displaced, lakhs of houses damaged and over 10,000 kilometres of roads destroyed in Kerala. Kodagu, too, has been badly affected. The nature’s fury has brought the focus back on the almost forgotten reports of Madhav Gadgil and a high-level group headed by K Kasturirangan, space scientist and member of the now defunct planning commission.

Many controversies may be surrounding the Gadgil and Kasturirangan reports, particularly how the Congress and Communist Party of India-Marxist (CPI-M) have played politics to appease the church. Be that as it may, the fact is that some of the critical recommendations of both committees have been rejected by the six states concerned – Kerala, Karnataka, Tamil Nadu, Maharashtra, Goa and Gujarat.

For the record, the Kasturirangan report pruned the 67 per cent of the areas in the Western Ghats that were found ecologically sensitive to 37 per cent. It, however, found many of Gadgil’s recommendations valid and suggested their implementation. It is pertinent to note that Kerala, Karnataka and Maharashtra were ruled by Congress governments then. Goa and Gujarat were under the Bharatiya Janata Party, while the All India Anna Dravida Munnetra Kazhagam was in power in Tamil Nadu when the Kasturirangan Committee submitted its recommendations in 2013. Various ministries of the Centre, then ruled by the Congress, too responded.

The Western Ghats Ecology Expert Panel (WGEEP) headed by Gadgil categorised the Western Ghats spread over 164,280 square kilometres into three zones based on their ecological sensitivity. The panel came out with broad guidelines for each of the zones – ecologically sensitive zone I, II and III – and suggested the setting up of Western Ghats ecology authority. It said that no new dams be built in the ecologically sensitive zone I and no more inter-basin diversions of rivers be allowed. Among other recommendations were banning of mining, including that of sand, no construction of building more than 2,000 sq/m, ban on thermal plants and other polluting industries.

Ban on mining in the ecologically sensitive areas of the Western Ghats: Barring Karnataka, the rest opposed the ban on the grounds of socio-economic development needs, a likelihood of law and order problems and livelihood imperatives. Maybe because of the courts’ rulings, Karnataka said it has stopped issuing licences for mining. Responding to a ban on quarrying and sand mining, Kerala, Maharashtra and Gujarat, said they preferred that mining be allowed with environmental impact mitigation measures without compromising environmental and ecological balances. The three states also stressed on launching a special scheme to regulate mining.

Maharashtra didn’t agree to the proposal of the Gadgil Committee that change in land use should not be allowed in ecologically sensitive zones and no new hill station be permitted on public land. Kerala, on the other hand, said it would accept the recommendations provided there were relevant provisions of law adding that its current legislations already don’t permit such conversions.

Maharashtra, Gujarat and Kerala told the Kasturirangan panel that they would not accept curbs on transportation infrastructure in the Western Ghats. They termed the recommendations as “unacceptable”. Maharashtra, Kerala and Gujarat sought the setting up of solar and wind energy infrastructure as they were green energy resources.

Kerala, Maharashtra and Tamil Nadu did not agree to any embargo on hydro-electric projects, saying the conditions recommended by the Gadgil panel were unacceptable. Karnataka told Kasturirangan Committee that it would consider the recommendations on hydro-electric power while taking up projects in the Western Ghats. On the other hand, Tamil Nadu, Maharashtra, Kerala and Gujarat opposed any restrictions on the height of dams and decommissioning of dams and thermal power projects in the region. Maharashtra, Kerala and Tamil Nadu strongly objected to the recommendation to not allow inter-basin diversion of water from rivers, saying it is against water policy that needs to be allowed for human needs.

Maharashtra strongly objected to the ban on industries that fell under 37 state industrial development corporation areas in ecologically sensitive zones I and II on the grounds that the impact would be severe. Kerala and Maharashtra called for stringent imposition of pollution standards in these areas. Kerala, Karnataka and Maharashtra agreed to the recommendation that organic farming be promoted in the Western Ghats but they said the farmers should be incentivised. Karnataka and Kerala were open to the idea of a new eco-tourism policy.

Not all the governments agreed to the setting up of Western Ghats ecology authority, with Tamil Nadu saying it has set up Hill Area Conservation Authority.

Various departments of the central government, too, responded to Gadgil’s recommendation.

After taking into consideration the responses from the states, the Kasturirangan panel went ahead to uphold Gadgil’s recommendation on a regulatory regime in the ecologically sensitive areas, a total ban on mining, including that of sand, and quarrying, total curb on thermal power projects in the sensitive areas, permitting hydro-power projects subject to certain conditions like ecological flow of rivers, a no-no to polluting industries in the sensitive zones, promotion of industries with low environmental impact and allowing projects subject to environmental clearances.

Now that the torrential rains and floods are over and people are recovering from their impacts, it is likely that these reports will again be allowed to gather dust. Another day, another flood, these reports will be revived in public memory. Until then, it is anyone’s guess how the governments concerned will implement the recommendations, especially when their vote banks are at stake.