Yet Again, Kodavas Forced To Defend Their Right To Carry What They Literally Worship – Their Guns 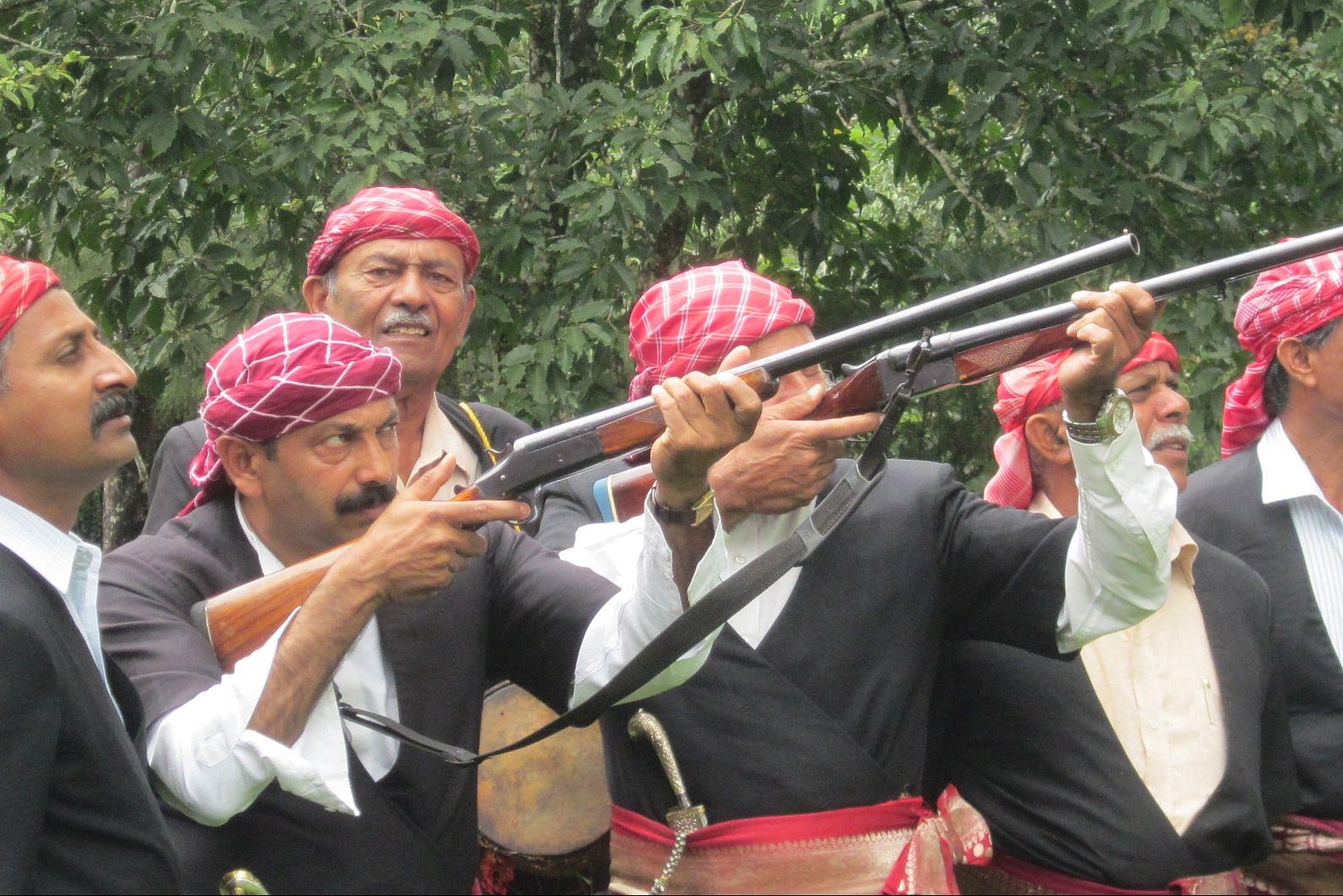 Kodavas with their guns.

Each year on 3 September, the Kodava community adorns its traditional attire, brings out the weapons which are otherwise kept at the altar in the ‘puja room’, burnishes them and offers puja to the kovi (gun) on the occasion of Kailpodh.

“This is like the ayudha puja of the Kodavas,” says N U Nachappa of the National Codava Council (NCC), as he talks about the preparations for this year’s Kailpodh.

The weapons are placed upright near the thokkbolcha (suspended lamp) with the climbing lily flower (thokk poo) placed upon the nozzle of the gun after which the river deity of the land, Kaveramma, is invoked.

Post lunch on Kailpodh, the senior-most Kodava, Kodavukar (chief of the clan) picks up the kovi which has been worshipped in the morning, and holds it in his hands, and recites aloud in Kodava takk: “Narino pandino battebutt panang, shatturana enangate, shatturu enanchengi, batte ketti pannang, mitturuk toneyayi nil, raayang miniyate, devara mareyate (Be it a tiger or a boar, go face it upfront, never incite an enemy, but if an enemy attacks, fight back unapologetically, stand up for a friend, and never nurture feelings against the ruler, never forget the almighty)”.

“The last words reiterate loud and clear that never shall a Kodava wield his kovi either against the ruler or the one governing and never is he to forget the almighty. Initiated this way, every young Kodava is handed over the gun as not just a right but also a huge responsibility,” explains Kokkalemada Manju Chinappa.

The prayers are followed by target-shooting (suspended coconuts), which was earlier a tradition where the Kodava set out with his loaded rifle to hunt down a wild boar.

While the floods ensured a low-key celebration last year, this year the NCC, one of the organisations representing Kodava interests, is geared up not just to worship the gun but also to state it clearly that the Kodava will not let go of his right to wield the gun without a licence, “for it is a part of who we are. It is an integral part of our cultural fabric and existence,” says Nachappa.

Kodava women also take pride in inheriting the gun. “Given that among Kodavas both men and women have an equal say, the gun isn’t just a man’s weapon. It is so much a part of my identity and who I am,” says a young Kodavathi Kshipra Cariappa, reminiscing how her dad initiated her into using the gun right and responsibly.

“Every Kodava child grows up watching, worshipping and wielding the gun with as much awe as pride,” adds Cariappa.

Cariappa, whose tryst with the gun began as a six-year-old helping her dad clean the gun for Kailpodh, looks forward to initiating her toddler daughter into it during their annual visits to Kodagu.

“We don’t have the gun here in Australia but we worship the kathi on Kailpodh,” says Cariappa as she prepares for the annual celebration away from Kodava land in Melbourne.

The privilege to own a gun was in the news once again recently in the context of a review of the Arms Act. A writ petition had been filed in the Karnataka High Court questioning the exemption granted by the government of India to the people from Kodagu under the provisions of the Indian Arms Act, 1959.

This petition was dismissed on 13 August by the high court after the Centre informed the court of the formation of a committee under the Ministry of Home Affairs for a review of the Arms Act, including the granting of exemption to people of Kodagu. The court has asked the Centre to take a decision in eight weeks.

The ministry on its part has sought comments and views on the said exemption from all the stakeholders “keeping in view the law and order situation in the region, and culture and sentimental issues of the said race”.

One of the views opposed to the privilege is that race and ancestral land tenure aren’t grounds to grant such a right.

The petition, originally filed in 2015, had been disposed even then with the court asking the petitioner to have his grievance addressed by the Home Ministry, which had told the court that the exemption provided was as per law.

While local politics and the demographic changes in the region are said to have triggered the current debate, what is at stake here is the cultural trait of an ethno-linguistic group whose numbers are already dwindling.

Exemption And Its History

The ‘exemption’ debate goes back to the late nineteenth century. After the rebellion of 1857, when the Disarming Act of February 1861 came into being, the then commissioner applauded the loyalty of this group of warriors and declared that the Disarming Act would not be “applicable to the gallant people of Coorg”.

The promulgation of Mark Cubban of 1861 read — “In consideration of the exalted honour, loyalty and intrepidity, characteristics of this little Nation of warriors and in recollection of its conspicuous services in aid of the British Govt, it is my pleasing Duty to notify hereby, for general information, in virtue of the power vested in me by the Govt of India, that the provisions of the act, commonly called disarming Act are not applicable to the gallant people of Coorg”.

But this too was not a privilege that the British accorded de novo but was a mere recognition of the existing customs and traditions of the natives of the region.

While the Indian Arms Rule 1951 continued to grant them the privilege, the Arms Rules 1962 had initially abolished this right. Statutory orders that were then issued in 1970 conferred these back.

The Kodavas thereby had to only avail an exemption certificate and a clarification by the Additional Secretary of the Karnataka government which stated that “every person of Kodagu race and Jamma tenure holder in Coorg is exempted from the provisions of section 3 and 4 of the arms act...”

Reminiscing the words of Sardar Vallabhbhai Patel in Parliament in 1948, that “he expects no danger from Codavas since they have proved themselves to be exceptionally law abiding people and that any other group of people except Codavas would certainly misuse the privilege given to any such groups,” Nachappa reiterates the legitimacy of the special rights.

And it is not just the Kodavas by race. The ‘traditional inhabitants’ of the land, around 22 communities, have this exemption.

The Kodavas And His Kovi

The Kodavas, who are ancestor worshippers, are said to see the guns as representing those that lived earlier, and hence hold them in equal reverence. The kovi is an integral part of all their rituals right from the birth of a child to the final journey. The birth of a child is marked by the firing of two shots while the death of a Kodava is announced with one.

“It is my birth right. The moment I am born a Kodava or a Kodavathi, I inherit this right to hold my kovi. So can those who have the jamma rights,” asserts a young vocal Kodava Prathik Ponanna, of the Kodava Naad Brigade.

“This is just an attempt to rile up communities,” says journalist Santosh Thamaiah, whose recent book Samara Bhairavi documents the lives of soldiers from the region. “Kodavas are known to live life large, celebrating, earning and making merry and keeping to themselves. We have never been those to upset equations,” explains Thamaiah.

The Kodava relation with the arms has been an eternal one. They have a long history of having served various rulers in the region. Then, in the eighteenth century, they were the ones to engage Tipu Sultan in battles. This is when they signed a treaty with the British having braved the massacre of thousands of their brethren at the hands Tipu’s forces at Devat Paramb in Kodagu in 1785. They later went on to brave the British atrocities too. And their contribution to the armed forces in independent India is part of popular memory and culture.

Theirs is the pride of having given the country its first Indian commander-in-chief Field Marshal Kodandera Madappa Cariappa (who had also ensured the dropping of a similar proposal in 1964), and Padma Bhushan General Kodandera Subayya Thimayya of the Kumaon Regiment who was the only Indian to command an infantry brigade in the Second World War.

Ajjamada Boppayya Devayya, the only Indian Air Force officer to be posthumously awarded the Maha Vir Chakra, was also a Kodava. Those who took the baton from them have added to an illustrious list of sons who have served the nation.

An ideal legal regime is not the one which imposes equality. It is rather the one that delivers fairness. And that is all the Kodavas ask for.