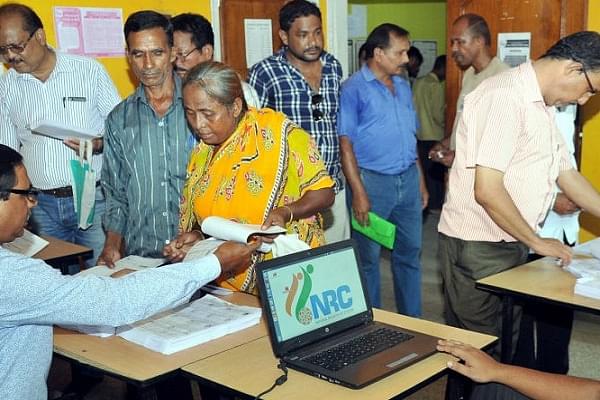 Assam’s ‘final’ National Register of Citizens (NRC) could turn out to be an ‘interim’ one. With most of the 19.06 lakh excluded from the final list being Hindus, and a fair number of indigenous people as well, a number of organisations have petitioned the Supreme Court seeking a complete re-verification and even a fresh exercise.

The reason for that is two-fold. One, the ‘final’ status of the NRC has come under cloud due to the many legal challenges mounted against it. The primary parties who have mounted the legal challenges are the ones who had petitioned the Supreme Court in the first place to order the NRC updation exercise.

Given these legal challenges, and a lot of official work notifying the ‘final’ NRC list yet to be completed, the 120-day period for those excluded to approach the tribunals for redressal is most likely to get stretched. This period starts from the day the Registrar General of India notifies the final NRC as such and the excluded formally receive a communication stating the reason(s) for their exclusion from the final NRC.

But all this is yet to be done and, thus, all those excluded from the final NRC can carry on with their lives in pretty much the same fashion as earlier. According to those who have filed petitions challenging the authenticity of the ‘final’ NRC — they have alleged that names of lakhs of illegal Bangladeshi migrants have been included in the NRC — the Supreme Court will start hearing their cases only after mid-November.

The second, and more important reason, for the Hindus and indigenous people of Assam excluded from the list not having anything to fear lies in the steps being taken by the Union and Assam governments. The Union government is drafting a fresh Citizenship Amendment Act that will grant Indian citizenship to Hindus, Sikhs, Buddhists, Jains, Parsis and Christians who have fled persecution in Bangladesh, Pakistan and Afghanistan.

A similar bill was passed by the last lok Sabha, but lapsed in the Rajya Sabha in February this year since the government did not have the numbers to ensure its passage in the Upper House. But the government will not have to face this hurdle now.

Also, the process of consultations with various stakeholders, including civil society organisations and political parties in North East India, as was promised by Home Minister Amit Shah during his visit to Mizoram in October, has commenced. The Union government’s resolve to take all stakeholders on board before introducing and passing the fresh Citizenship Amendment Bill (CAB) in Parliament is expected to take care of the latent opposition to it in the North East.

Once the Citizenship Amendment Bill is passed by Parliament and becomes an act, all Bangladeshi-origin Bengali Hindus whose names have been excluded from the ‘final’ NRC will stand to become Indian citizens. The fresh bill, it is learnt, will also have provisions for recent migrants from Bangladesh. They will not be prosecuted and will have to wait for a specified number of years before being granted Indian citizenship.

Thus, say officials in the MHA, Bengali Hindus who have come in from Bangladesh have nothing to fear. While those who have entered India before a cut-off date specified in the new bill will be eligible for Indian citizenship immediately, all those who have crossed the international borders after that date will have to wait for a specified number of years. In the interim period, they will be granted immunity from prosecution even though they will not enjoy the rights of Indian citizens.

In any case, say the MHA officials, no Hindu will end up in the detention centres being constructed across Assam to house illegal migrants. The Union government, they said, is clear that a distinction needs to be made between members of persecuted minority communities in the three neighbouring countries who seek shelter in India and those who migrate for economic and other reasons and have caused a calamitous demographic change in some states. It is the latter who will be sent to the detention centres.

Tens of thousands of indigenous people of the state — Bodos, Rabhas, Misings, Tiwas, Ahoms etc — have been left out of the final NRC. Many Assamese Hindus and Muslims also found to their dismay that their names have not been included in the final NRC. State officials are consulting legal experts to explore the possibility of introducing legislation that would provide blanket protection to the indigenous people of the state.

In case such legislation is not possible, some administrative measures would be put in place to ensure swift and favourable disposal of all appeals filed by those indigenous people who have been left out of the NRC.

“It is extremely easy to detect who is indigenous to Assam and who is not. Thus, the indigenous people who have been excluded will not face any problems when they file appeals before the Foreigners’ Tribunals,” said a senior state official.

The state government is also holding consultations with constitutional experts and the Union government to ensure that the measures that will be put in place are foolproof.

A number of organisations have filed petitions before the Supreme Court pointing out anomalies in the final NRC and seeking a full re-verification of all the names that have been included in the final list. They have pointed out instances of people being declared ‘foreigners’ by tribunals in the past whose names have figured in the final list.

The Assam Public Works (APW), a civil society organisation on whose petition the apex court ordered the NRC updation exercise, has pointed out glaring discrepancies in its petition for full re-verification of the NRC before the Supreme Court. APW’s Aabhijet Sharma said that a supplementary petition would be filed before the apex court in the second half of November citing proof of how the NRC updation process was subverted.

“We will show how the software (used for processing all the data) was flawed and also how numerous people of doubtful nationality were included in the NRC. We will demand an audit of the software by experts from IIT and a thorough screening of the entire process of accepting and processing claims (for inclusion in NRC),” said Sharma.

He added that concrete evidence of glaring anomalies in the NRC would be provided to the Supreme Court.

Given all this, the final NRC may not turn out to be final after all. That means all those whose names have not figured in the final list will get a lot more time to file appeals before the foreigners’ tribunals.

In the meantime, Bengali Hindus and the indigenous people of Assam among the excluded will get legislative protection that will ensure they do not land in the detention centres. They will become Indian citizens, and the Union and Assam governments are firm in their resolve on this.