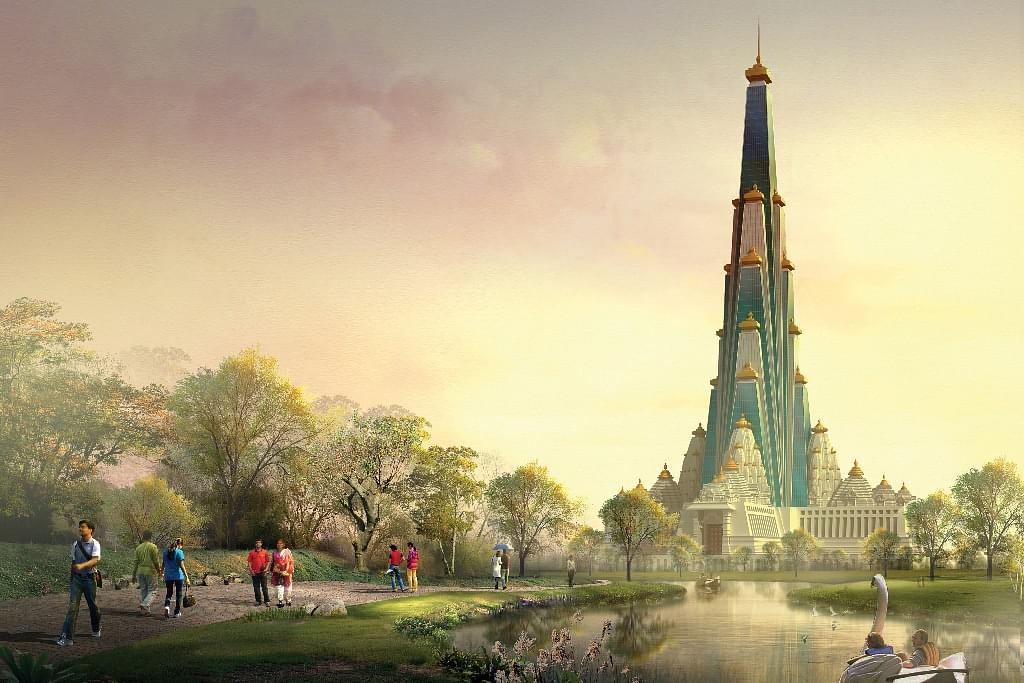 An artist’s impression of the Vrindavan Chandrodaya Mandir.

A proposal to construct the world’s largest religious structure, the 700-feet, 70-storey Vrindavan Chandrodaya Mandir, with a built-up area of 5.4 lakh square feet, has drawn the usual killjoy attentions of the National Green Tribunal. The tribunal has asked ISKCON, the International Society for Krishna Consciousness, which has proposed the temple complex, and the Central Groundwater Authority to respond to a petition of a green activist. The activist claims the giant temple will deplete the Yamuna waterbed since it is supposed to recreate the forests of Vrindavan around the temple, complete with 12 forests spread over 28 acres.

That somebody should oppose the building of greenery and forests to prevent some kind of future water depletion problem is astounding, but that is another matter. The temple, when constructed, would not only be an architectural innovation, but also create a new hub for commercial and spiritual activity in Mathura. While nobody would want to ruin the environment for creating this marvel, the right way to deal with the challenges thrown up would be to compensate for any resultant impact through compensatory actions, including augmentation of Yamuna’s water through other means, treating waste water, etc. What one should oppose is this mindless effort to stop the construction of a temple that most Indians would be proud of.

In independent India, with the exception of the rebirth of the Somnath temple, there have been a few attempts at rejuvenating our temple inheritance. The Birlas went on a temple spree, and the Swaminarayan sect has been building excellent Akshardhams to take our inheritance forward. The Tirumala Tirupati Devasthanam (TTD), which runs the enormously rich Tirupati temples, has been expanding its footprint to some new places, but the TTD is a state-run institution, and its efforts are as mediocre as the state controlling it. There has been no path-breaking effort by it despite having all the resources to do it.

The truth is that India’s current social decadence can be partly linked to our inability to build on the architectural heritage our forefathers left for us. Indian temple architecture is unique, with interesting variations in the north, south, east and west. But if we want cultural rejuvenation, we need to create new temples with innovative designs that marry two objectives: drawing on our rich heritage, while also experimenting with novel ideas. This is exactly what the ISKCON temple might end up doing, if built right.

As (arguably) the world’s tallest religious structure, the temple will break new ground in terms of architecture and engineering (see model picture), but, equally important, it is a kind of riposte to the Abrahamic challenge in India. Churches and mosques are built not only to cater to the religious needs of the faithful, but also to send a message of power and inculcate awe in everyone around. On the other hand, our modern temples tend to be understated. New churches and mosques in India try and tower over the landscape so as to project power to new and future converts. It is a challenge that Hindu temples now need to meet even while retaining the spiritual flavour of the timeless temples from our golden heritage.

It is also time to debunk the myth that temples are primarily spiritual centres for the devout. Where large temples come up, the entire economy gets a boost, and a new ecosystem is created that can promote engineering, architecture, schools, health institutions, and related social and cultural activities. Temples are the future hubs for Hindu rejuvenation.

It is a pity that most Hindu temples in south India, and increasingly some in the west, are being run with state meddling. States, even those run by Bharatiya Janata Party, tend to see temples as sources of cash rather than centres of spiritual and temporal advancement. They are thus effectively killing the spirit of Hinduism.

While battles to free temples from the dead hand of state control have begun sporadically, it is equally important to create new temple towns in various parts of India that begin on a clean slate, without government involvement, and free to pursue their own paths. In this scenario, it is important to not only seek donations to build new temples, but also allow alternative and innovative modes of funding to develop. For example, why not allow villages on the peripheries of cities to pool land and create temples as a way of not only improving the livelihoods of their residents, but also as a vehicle of caste collaboration, with every group being a co-owner in our heritage? At the other end, why not create dharmic funds to make temple-building one of their core objectives? Such funds can invest in dharmic product companies (incense sticks, religious books, cow shelters, etc) and also provide opportunities for giving investors some returns, though this cannot be the main objective. The real return ought to be psychic, the happiness that comes from giving back to society what we have gained from it.

India, especially Hindu society, needs a big idea to get over its inherent divisiveness, which can be easily exploited by forces inimical to Hindu society. Some “modern” voices advise us to give up the Ram Temple in Ayodhya and build some hospital or school there when it is precisely a flourishing Ram Temple that will bring forth the resources to build schools, hospitals and Veda pathshalas there. Where there is a temple, there will be economic gain and growth.

We need to get past our old confusions and squeamishness engendered by colonised Nehruvian minds who keep telling us that temples are a waste of resources. They are not. Temples are sources of cultural and economic rejuvenation – and we need a proper marriage of resources and spirituality to lift Hindu society out of its morass.

It can be argued that there are so many abandoned or dilapidated temples that ought to be our first priority. The Sri Dharmasthala Manjunatheshwara Dharmasthana Trust is already doing great work in this regard, but we should never adopt either/or arguments when the cause is right. We need to reclaim and restore old temples as much as build new ones. Sometimes the new can exist along with the old, even in the same premises. Dharma needs both.

At this point, it is worth recalling the first line in the Chanakya sutra: “Sukhasya moolam Dharmah; Dharmasya moolam arthah”, which translates thus: Happiness comes from following Dharma, or right conduct, and the basis of Dharma is wealth. There is no better way to live up to this advice than building new and interesting temples from the ground up. Dharma and economic well-being are closely related.